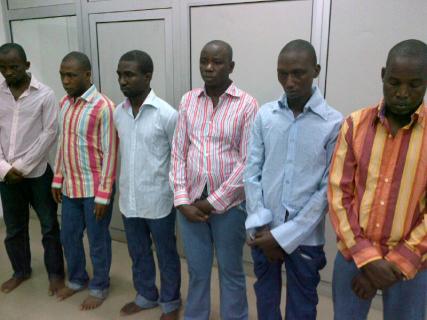 The State Security Service, SSS at their Headquarters in Abuja on Wednesday, paraded six persons suspected to be killers of Governor Adams Oshiomhole’s Principal Secretary, Mr. Olaitan Oyerinde. The suspects were in addition to those arrested by the police in connection with the killing.

The late Olaitan was said to have been murdered by the trio of Mohammed Ibrahim Abdullahi, Raymond Onajite Origbo, Chikezie Edeh while the other suspects were said to be habitual buyers of stolen items.

According to information from the SSS, investigations revealed that the careless statements made by the late Oyerinde’s security guard, Ali Ihade, at various times about his master’s position in Government attracted the attention of the prime suspect, Mohammed Ibrahim Abdullahi, who consequently hatched a robbery operation.

The SSS also stated that information obtained from the gang members indicate that the late former Principal Secretary was shot and killed by the prime suspect, Abdullahi, when he attempted to go underneath his bed. Abdullahi was said to have believed that the late Oyerinde was reaching for a gun under the bed and therefore shot him.

Items recovered from the suspects which were allegedly removed from Oyerinde’s residence after the incident were Four BlackBerry phones, one Ipad, two Galaxy Pads, one Laptop, wedding ring and an unspecified amount of money belonging to Mr. Adeyinka Oletubo, brother- in -law to Comrade Oyerinde.

The prime suspect, Abdullahi, 46 years old security guard who hails from Gombi Council in Adamawa state, had confessed being part of the four man armed gang that robbed Oyerinde’s residence at Ugbor, Benin city, on 4th May, 2012. He also, according to the SSS, confessed firing the gunshot that killed Oyerinde.

Chikezie Edeh,30 years old and one of the suspects said to have been deported from France in 2006, allegedly confessed to the crime and confirmed that Abdullahi fired the shot that kiled Oyerinde. He also disclosed that he received a mobile phone and an Apple ipad as his share from the operation which he sold for N10,000.

The murder weapons used during the robbery operation, have been recovered while the suspects will soon be handed over to the police for criminal prosecution.