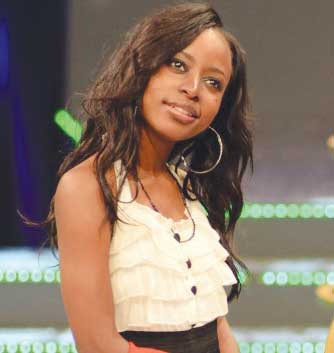 As the continent’s hit television reality show, Big Brother StarGame, enters its final week, the quest for the whopping cash prize of $300,000 has been narrowed with the Sunday eviction of Uganda’s Jannette.

After managing to dodge nomination for 11 weeks, the petite music wannabe’s luck ran out last Monday as she fell foul of Wati and Lady May – and then received fewer country votes than Kyle, Lady May and Prezzo during the week to see her time in the show come to an end.

Jannette’s departure means that there are six housemates left running for the cash prize, which will be awarded Sunday during the live finale at the Sasani Studios in Johannesburg, South Africa. Prezzo, Lady May, Wati, Talia, Keagan and Kyle would need Africa’s votes to determine which of them wins Big Brother StarGame.

It was a massive week in the Big Brother house for the housemates who worked hard to win their ONE Campaign task. They had celebrity shout outs and visitors in the shape of Mary J. Blige, Bono, Nas, Melanie Fiona, Zolani Mahola and Nigeria’s own 2Face Idibia.

Kyle had some regrets about putting Keitta up for eviction last week, while Jannette struggled to come to terms with her first nomination.

Wati, the Head of House, revealed his “save and replace” decision to his housemates at the end of a pivotal week. IK, the show host, asked the Malawian to stand and explain his decision. IK didn’t waste time, returning to the house to reveal the result of Africa’s votes this week. After revealing the fates of the rest of the nominees, the spotlight did indeed fall upon the two Ugandans. After a tense wait, IK revealed that the eighth housemate to be evicted from Upville would be Jannette.

The “Small Princess” joined IK on stage and discussed her famous dance moves, party antics and alter ego “Lola Fierce”. She admitted that she found Nigerian housemate Ola “really sexy” and said that she had made peace with Wati during the course of her final day as she felt that if she was to be evicted, she wanted to leave the house on good terms.

The Ugandan said she had come into Big Brother StarGame to have fun – and certainly did. She was surprised to see that Lady May had nominated her, but had expected a nod from Wati.

Sunday Night’s Live eviction show was as packed with music as it was with drama, as DJ Pita from Uganda’s Sanyu FM spun the decks, Angola’s Young Nucho performed I’m Not Wayne and South African hip-hop stars Jozi rocked the house with Baby Don’t Cry.