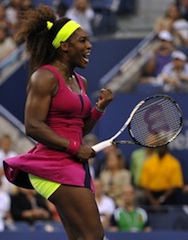 Three-time champion Serena Williams cruised into her sixth US Open final on Friday with a 6-1, 6-2 mauling of Italian Sara Errani and will tackle world number one Victoria Azarenka in the final.

Williams, the Wimbledon and Olympic champion, will be looking to capture a 15th Grand Slam singles title in Saturday’s title match which she has reached for the loss of just 19 games and without dropping serve.

She will take a 9-1 winning record into the final against top-seeded Australian Open winner Azarenka, who came back from a set and a break down to beat 2006 champion Maria Sharapova 3-6, 6-2, 6-4 to reach her first New York final.

“I love playing here. It’s always an honour, every time I play here is such a pleasure,” said Williams, who was just 17 when she won her first US Open title 13 years ago.

“It’s awesome to be back in the final again. I dreamt about this all year and I am really happy. It’ll be great to win again, but Victoria also wants it. But hey, I’m the last American standing, so come on guys.”

Williams, 30, was barely troubled by 10th-seeded Errani, the French Open runner-up, who she had already defeated three times in three outings prior to Friday’s mismatch.

She broke three times in the first set, which was wrapped-up in 30 minutes, firing 18 winners to just three and allowing the Italian just five points on her serve.

More breaks followed in the first and fifth games of the second set as the American built a 4-1 lead.

Errani, the first Italian woman to reach the US Open semi-finals, saved a match point in the seventh game.

But Williams, the runner-up to Samantha Stosur in a bad-tempered final in 2011, wasn’t to be denied, winning the tie with a second serve ace — her ninth of the contest and 50th of the tournament.

Her 64-minute victory was perfectly illustrated by 38 winners to just six by Errani.

“For me, Serena is incredible,” said the Italian. “The way she won today and when she plays like this, she is the best player in the world.”

Williams second round win over Spain’s Maria Jose Martinez Sanchez kept her on court for the longest stretch — and that was only 82 minutes.

“I think Serena will win on Saturday. Azarenka is also a strong player but Serena is another level.”
AFP Report