No Project Of This Govt Benefits Our People - P.M. News

No Project Of This Govt Benefits Our People 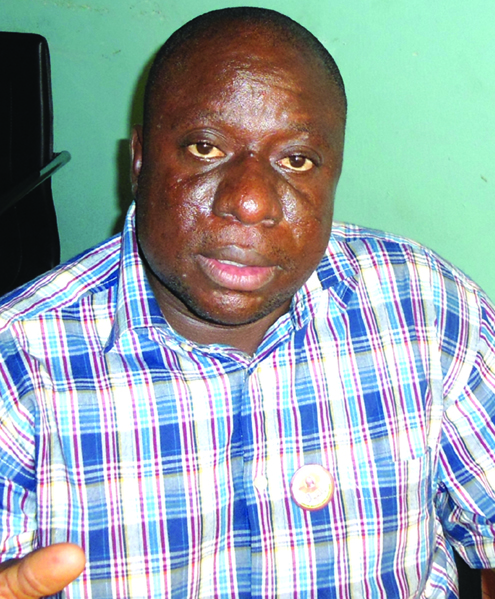 In this interview with FUNSHO BALOGUN, Ikechukwu Nwafor, chairman, Medical and Health Workers Union of Nigeria, Ebonyi State Council, speaks on the lack of industry, government’s misplaced priorities and the civil service

What is your take on projects embarked upon by the Elechi administration?

The government may have their own intentions. I believe that, for any policy there must be deliberations on how it will affect the lives of the people that are governed. They are building Ochudo city, they are building bridges, they are building markets and according to the governor, he collected a bond that he is using to build all those things and as far as I am concerned, Ebonyians are very poor. As I am talking to you there is a list compiled of graduates from Ebonyi State that are unemployed and they are over 20,000 graduates. The list is in the Government House, the SSG’s Office; the exercise was concluded last week. What I am saying is that what are the things you can do that can provide jobs for these common people? We are talking about graduates; we’ve not started talking about those who did not attend the university. Not long ago, the Federal Medical Centre made an advert for junior workers and we had 17,000 people that came to apply. We had to conduct the interview at the township stadium; and the township stadium could not contain Ebonyians who came to look for a level three job. This is a fact, you can confirm. There is serious poverty in this state. At the level of the civil servants, they are poorly paid, poorly renumerated and nobody wants to talk about it and the governor tells us that he can only act within the limits of his resources. And (it seems) the limit of your resources is giving a contract of over N11bn for Ochudo city when the downtrodden are suffering, the limited resources will cost you N400m at 20 per cent to build bridges, because I heard the Commissioner for Works addressing the media that they have given N450m at 20 per cent interest for take-off.

A bridge at N450m at 20 per cent, you can imagine what is the 100 per cent cost for one bridge in Ebonyi State, then compare that to what Julius Berger uses to build bridges in other states. So these are the things that limited resources are leading us to now. But the limited resources have not found it comfortable to proffer places where the common people can work and earn their daily living. So if we are talking of limited resources, we should start from where our problem actually lies. I want to tell you that average Ebonyians lack shelter. The government quarters civil servants occupy in Ebonyi State are the ones built by the former government; the present government has not built a single shelter for civil servants in the state and a three-bedroom flat costs about N25,000 a month. These are the problems our limited resources would have faced. I don’t know how our limited resources can be channeled properly. There is little the limited resources can do without providing food for the common man. As far as I am concerned, Ebonyians are suffering unlimitedly and uncontrollably. The most fascinating contracts are Ochudo city and bridges. Building a market in a swampy area and Ebonyi State has land everywhere, open space everywhere. I don’t know why they would go and put money in a swamp. They have been on that project for three years now and nothing has been achieved, but they think that they can achieve a project in a more difficult place than on an open land where things can easily be done. Ordinarily, whoever is occupying a public office is a human being like us. If an individual was to embark on a personal project, he/she would seek where it is easy for him/her. So I don’t see any reason why somebody would think because it’s government money, go and build a project in a swamp where you know it’s very difficult to achieve. But if they have such strong faith that they will achieve it, fine, we’ll watch them. But is that the way of channeling the limited resources? So, that is it about the contract.

Why is it that nobody has a ‘‘pure water’’ factory in Ebonyi State instead of going all the way to Enugu to get water?

When you talk about the water people drink in Ebonyi State, it has to do with the focus of a particular government. I know too well that since this government came in, they have been telling us that they are doing water project – Oferekpo scheme among other water schemes. And they have been telling us how much they have invested in building the water scheme and we are living with hope that one day we are going to drink the water from the water scheme; and the coming of mini-industries which the government can attract that can be producing some minor things. In Ebonyi State we don’t even have a common ceramic industry, or pure water, or even plastic industry. In Onitsha and Enugu, individuals own plastic industries, but none is in Ebonyi. The only place people can come make a living is the rice mill industry, which is owned by corporate bodies. But today they are facing challenges because the government came one day and said they should vacate those places. To where? That they were being relocated to three places in Ebonyi State where they have structures already there. Where are the structures they will relocate to? They have specific structures that suit their machine and rice production. Those things were not put into consideration, but thank God for the judiciary. The National Industrial Commission said they should hold on, possibly to get them a place to relocate to. If they really want to make this town a satellite town, fine. We all want it but everybody must not die for the satellite town to come because by the time everybody dies, who enjoys the satellite town?. The time they drove people away from the place they are building Ochudo city now, it was a very hard policy on people, so many people died and the place they asked people to go is not the place they are building on now, and it has taken about four to five years.

If you tell Okada (commercial motorcyclists) not to ply a major road because of security, that is fine. At a point, they said Keke (tricyle) should not operate beyond 9 p.m., that it’s only taxis. Then you come out in the night and see people who have to go somewhere at night and there is no means of transportation. In Enugu State, they floated a taxi service and town shuttle buses and these have helped the people. Why can’t such things happen in Ebonyi State? Float that kind of transport system and we will all applaud the government,  not subjecting people to terrible sufferings that could have damning effect on them. The truth is that I have not witnessed any single policy that has favoured the common people in the state, and I stand to be challenged about it. During campaign the governor brought Keke Napep, about 40 units, and said he did not buy it from the government purse but from his own money and he used it to do campaign for the Okada people to vote for him. Why not run a scheme for the Keke Napep people with government funds; anyone that buys the Keke will repay back to government instalmentally and the government will still recoup that money. The problem of the common people is that they do not have the capital to start a project: you make them to start it, they pay back and we all live happy. In Enugu State, the taxis they bought, you’ll be paying abut N17,000 or N18,000 weekly until you own the car. Why can’t such things come to this state? This is a terrible situation; we don’t know what to do; we are only asking God.