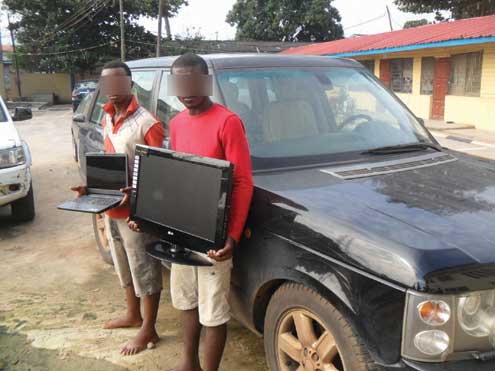 Obinna Sunday and Sunday Eze with the SUV and other items they allegedly stole.

Investigations revealed that in June this year, Obinna, the laundry man and Sunday who was a security guard, broke into their master’s house at Plot 858, Durosinmi Abokuwa Street, Omole Phase I, Ikeja, Lagos, Southwest Nigeria, and removed valuables worth millions of naira.

Their master, Dayo Famoroti, reported the incident to the police at Isheri division.

He told the police that when he returned home, the doors to his house were broken and property worth N25 million stolen.

He added that his two domestic servants, Obinna and Sunday, were nowhere to be found when he returned.

The matter was referred to operatives of the SARS who worked on their phones to track them down at Mowe, Ogun State.

After arresting them, operatives of SARS also recovered the Range Rover SUV and other items allegedly stolen from the buyers at Nnewi, Anambra State, southeast Nigeria.

In their statements to the police, the two suspects allegedly confessed to the crime.

Sunday, the security guard, said he warned his accomplice, Obinna, not to go back to their master’s house, after they had successfully burgled the house.

However, Obinna did not heed his advice. He returned to their boss and was arrested.

He confessed to the crime during interrogation and led detectives to the hideout of the laundry man where he was arrested.

P.M.NEWS gathered that the two suspects will soon appear in court.