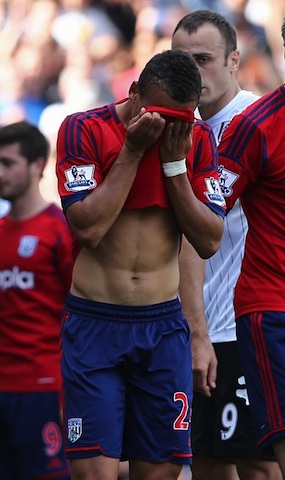 Nigeria international and West Brom forward Peter Osaze Odemwingie was sent off for violent conduct as the Baggies lost in the Premier League for the first time this season.

After collecting the first yellow card, he was shown a straight red card for kicking out at Sascha Riether.

The former Manchester United striker, making his first start since a deadline-day move from Old Trafford, opened the scoring in the 32nd minute before adding a second from the penalty spot on the stroke of half-time.

Fulham midfielder Steve Sidwell made it 3-0 late on.

Berbatov’s opener came after good work by winger Alex Kacaniklic who got the ball to him despite being surrounded by three West Brom defenders.

The 31-year-old then did the rest, beating Ben Foster with a shot he bent inside the goalkeeper’s left post.

Berbatov came close to adding a second in the 40th minute but his diving header flew past the post.

Fulham though were awarded a penalty in first-half injury time, when Billy Jones fouled Kacaniklic, and Berbatov sent former Manchester United team-mate Foster the wrong way from the spot.

Foster then made several superb saves in the second half before Sidwell scored Fulham’s third goal a minute from time.

Former England keeper Foster prevented substitute Pajtim Kasami’s front-post cross from sneaking in and Hugo Rodallega headed the rebound onto the crossbar before the loose ball fell to Sidwell, who lashed home into an empty net