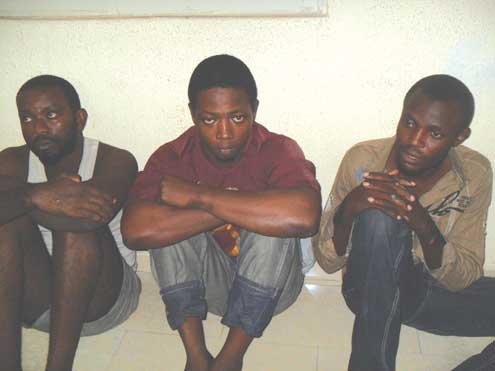 The Lagos State Police Command today paraded three suspected kidnappers who allegedly held captive a cousin  of business mogul, Alhaji Aliko Dangote. The name of the victim was given as Yahaya Aminu.

The three suspected kidnappers paraded are: Pius Ubaka Livinus, 25, who allegedly kidnapped an Indian  national in 2010 and also kidnapped a Dangote worker  in February this year; Kenechukwu Onyema, 27, and Segun  Ayebe, 32, who was arrested while collecting $40,000 ransom  at Ajah, Lagos.

The three suspects were arrested by men of the Special Anti-Robbery Squad, SARS, recently during a well  coordinated search for the gang members.

SARS sources told P.M.NEWS that the gallantry of one of their men, Corporal Abdulrahaman Mohammed, led to the  arrest of the suspects.

The corporal was said to have trailed Ubaka Livinus to a roof top at Ajao Estate.

When SARS men arrested the suspects, a KIA Serato car was recovered from them. Their captive was also  released.

The suspects, during interrogation, allegedly confessed to SARS men that they committed the crime.

In his confessional statement, Ubaka the son of a dismissed Inspector of Police, Livinus Afone, who was said  to have been serving in Force Headquarters, Obalende, said his arrest was the second in recent times. He  stated that he participated in three of the gang’s operations.

He confessed that he had wanted to quit kidnapping in February this year when his attempt to kidnap a staff  of Dangote company was foiled.

He added that he was nabbed when he attempted to collect a $32 million ransom from relatives of his victim.

Ubaka, who is from  Abia State, southeast Nigeria, said he went back into kidnapping because his share of  $40,000 (N5.5 million) out of $200,000 collected from an earlier operation was used to buy two plots of land  at Lekki Free Trade zone for N2.5 million and he was defrauded when he attempted to obtain a visa to Portugal  after he paid N850,000 to a fraudster.

He said when he was arraigned before a Lagos magistrate’s court for an earlier crime, he was admitted to bail  in the sum of N100,000 with two sureties each in like sum.

Ubaka added that his Infinity SUV was given out as collateral to his counsel, Barrister Evans Duru who  applied for his bail before the court.

In his confession, the second suspect, Segun Ayebe, from Delta State, southsouth Nigeria, said he joined the  gang during their third kidnap operation because he had just returned from a heart surgery in India and  needed money.

SARS officials said the three suspects will soon be arraigned in court at the completion of investigation.