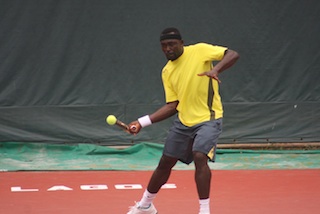 Nigeria’s last man standing in the first leg of the ongoing Governor’s Cup Lagos Tennis Championship, Henry Atseye, crashed out of the ITF approved championship after he lost his second round match to Kento Takeuchi of Japan 6-3, 1-6, 5-7 at the Lagos Lawn Tennis Club, Onikan on Wednesday.

Atseye pulled up a stunning performance against the tournament’s third seed, Takeuchi in the first set which he won 6-3, but could not survive the arsenal and fast pace of the Japanese in the second and third set, which ended in favour of Takeuchi in 6-1, 7-5, thus ending his ambition to progress to the quarter final of the competition sponsored by FCMB Plc. and Etisalat Nigeria.

Unlike Atseye, compatriot Onyeka Mbanu was an easy prey for top seed Kamil Capkovic of Slovakia as he was beating in straight sets of 6-1,6-1, while Nigerian Sanni Adamu also lost to Alesandro Petrone 6-2,6-2.

Nigerian Samuel Omoile and Bayo Phillips of USA defeated the duo of Clayton Gilberton of South Africa and Yu Takahashi of Japan 7-5, 6-2 in the Men’s Doubles, while the pairs of Conny Perrin of Sweden and Chanel Simmonds of South Africa beat the duo of Christina Dinu and Vikoniya Tomoya of Bulgaria 6-3,6-0.