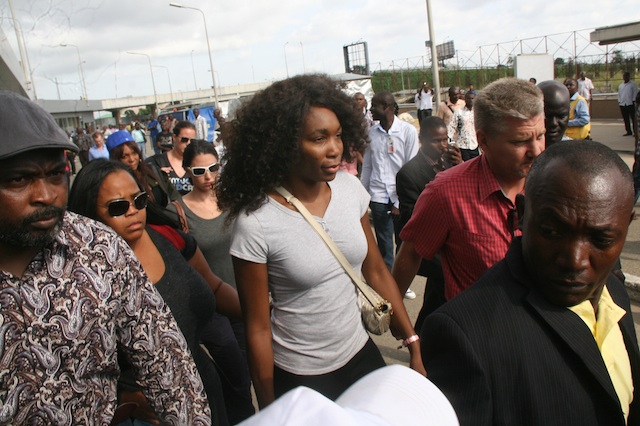 The visit of the Williams Sisters to Nigeria has finally become a reality with the arrival of Venus to Lagos Tuesday afternoon.

P.M.News can report that the seven times Women’s Singles grand slam winner arrived at the Murtala Muhammed Airport in Ikeja via Delta Airline at about 3p.m with officials of ‘Breaking The Mould,’ BTM campaign on ground to receive her.

Although, the American tennis icon wished she could interact well with the pressmen at the airport, the overzealous security operatives prevented her from doing so.

“Hello! Hello!! I’m glad to be here in Nigeria,” Venus managed to say as she was whisked away by the organisers of the four-day visit.

It was gathered that her younger sister, Serena was also due to arrive Lagos today as part of Nigeria’s leg of the two-nation tour of Africa by both the African-American tennis players.

The Williams sisters are scheduled to pay a courtesy visit to Governor Babatunde Raji Fashola of Lagos State on Wednesday at the State House in Marina.

They are also scheduled to hold an interactive session with the media at the Federal Palace Hotel, Victoria Island and will play an exhibition game at the Tennis Section of the Ikoyi Club 1938 and the Lagos Lawn Tennis Club before they leave Nigeria for Johannesburg, South Africa on Friday.