How Ghanaian gambler threw away bank's $2.3b 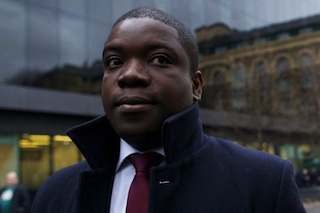 LONDON(AFP) – Kweku Adoboli, the UBS trader who gambled away $2.3 billion, painted himself as a model employee who fell victim to the turmoil of the markets in his quest to impress the bank he loved.

Fresh-faced and elegantly-dressed, the Ghanaian-born trader, 32, regularly broke down in tears during his two month trial in London, insisting he thought of Switzerland’s biggest bank as his “family”.

But a jury convicted him of two counts of fraud on Tuesday, while clearing him of four counts of false accounting.

Adoboli’s early life was spent shuttling between countries because of his father’s job as a United Nations official.

After spells in Ghana, Israel and Syria, he was sent to Ackworth School, a small Quaker boarding school in northern England.

“He was an able student who made a very positive contribution to the school community,” his headteacher Kathryn Bell recalled.

He went on to study e-commerce and digital business studies at Nottingham University in central England and secured an internship at UBS, which offered him a full-time job after he graduated in 2003.

Adoboli rose swiftly through the ranks, joining the exchange traded funds (ETF) desk in 2006, dealing with funds whose value rises and falls depending on the performance of the markets they track.

By 2007, he and another more senior trader were managing a portfolio worth $50 billion.

It might seem “crazy” that a 26-year-old with just five years’ experience was in charge of such a huge portfolio, Adoboli told the jury, but “that’s how it was”.

He described how he would wake up at 3:00 am to monitor the financial markets around the world, and regularly stayed in the office until after 9:00 pm. Twice, things were so hectic in the office that he slept under his desk.

“UBS was my family, and every single thing I did was for them,” he told the court.

With a six-figure salary, a love of fine wines and a huge, ultra-modern apartment to host his all-night parties, Adoboli seemed like any other young man who had struck gold in one of the world’s most powerful financial centres.

But unbeknown to friends and colleagues, he had quietly begun conducting off-the-book trades in 2008, holding them off the ledger until the market rebounded.

“His motive was to be known as a star trader at UBS,” said Perry Stokes of the City of London Police, who led the investigation against Adoboli.

“To increase his bonus, his status, his job prospects, and his ego.”

A friend jokingly compared Adoboli to Jerome Kerviel, the French trader who brought the Societe Generale bank to the brink of collapse by gambling away 4.9 billion euros ($6.3 billion).

The email exchange, from 2008, was read out in court. “The more I have read about this, the more interesting parallels I see with your life,” the friend unwittingly wrote.

“Please don’t let me read about you in the papers in the same fashion.”

But as the eurozone debt crisis savaged the markets, his luck ran out.

He was forced to spin a complex web of fictitious transactions to hide the losses, and UBS colleagues were increasingly asking him about discrepancies in his trades.

A final post on his Facebook page on September 6, nine days before he was arrested, read: “Need a miracle.”

On September 14, a back office accountant received the “bombshell” email in which Adoboli confessed that UBS was exposed to colossal losses resulting from his unauthorised trades.

He was hauled in for questioning, and arrested at the bank in the early hours of the next morning. His arrest in September wiped 10 percent off the bank’s share price.

“The amount of money involved was staggering, impacting hugely on the bank but also on their employees, shareholders and investors,” said Andrew Penhale, deputy head of fraud at the Crown Prosecution Service.

During the trial, he insisted that what he had done did not make him a “rogue trader”.

“It is not fraudulent — it is finding a way to do your job,” he told the court.

On Tuesday, a London court found him guilty and jailed him seven years.

“There is a strong streak of the gambler in you,” judge Brian Keith told Adoboli as he sentenced him. “You were arrogant to think the bank’s rules for traders did not apply to you.

“The tragedy for you is that you had everything going for you.

“Your fall from grace as a result of these convictions is spectacular.”

The judge said Adoboli would serve half his sentence before being released on licence.

Adoboli wiped away tears as he was sentenced. He had admitted the losses but denied any wrongdoing.

During the two-month trial he claimed senior managers were fully aware of his activities and encouraged him to take risks to make profits for UBS.