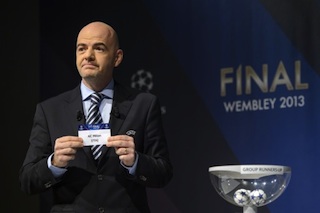 AC Milan versus Barcelona and Real Madrid versus Manchester United are the top ties of the last 16 of the Champions League, after the draw was made at UEFA headquarters in Nyon, Switzerland, on Thursday.

Here is the full draw, with first leg matches to be played on dates between February 12/13 and February 19/20 and return legs between March 5/6 and March 12/13: