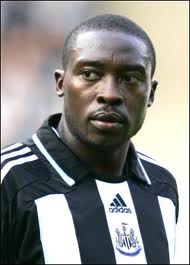 Shola Ameobi in Newcastle jersey: back in England

Newcastle boss Alan Pardew will not allow striker Shola Ameobi to play for Nigeria at the Africa Cup of Nations in January.

The 31-year-old Ameobi, who once played for the England Under-21 side, had been named in Nigeria’s provisional squad by coach Stephen Keshi for the tournament which gets underway in South Africa on January 19.

But Pardew insists the player is needed for the English Premier League campaign.

“Shola won’t be going to that, and the national team manager knows the reasons behind that, which I am going to keep to myself,” said Pardew.

Ameobi scored the winning goal in Newcastle’s 1-0 win over QPR on Saturday after making his Nigeria debut in a 3-1 friendly win over Venezuela last month.

Nigeria will take on defending champions Zambia, Ethiopia and Burkina Faso in Group C at the Africa Cup of Nations.

Super Eagles coach, Stephen Keshi, yet to react to this development.