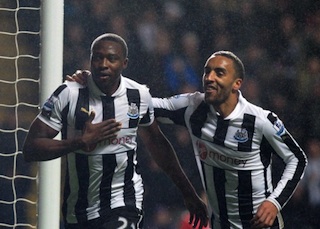 shola Ameobi with teammate: not playing for Nigeria

Super Eagles Chief Coach, Stephen Keshi appears to have given up on his battle to land Newcastle striker, Shola Ameobi for next month’s African Cup of Nations, AFCON, as a contract clause Ameobi signed could exclude him from the Championship.

Keshi, who addressed the media in Abuja, Nigeria on Boxing Day, revealed that Ameobi may not play for Nigeria if Newcastle manager, Alan pardew does not release him.

A visibly worried Keshi said: “I spoke to the gangling striker, Ameobi on Christmas Day and he told me he signed a clause in his contract that says he cannot go to the Nations Cup without the Manager’s permission about two years ago.

“And to make matters worse, Newcastle fear that Demba Ba will be leaving the club by the January transfer window, and they need a strong strike force. With Ameobi being their most experienced player in that area, we may not have him for Nigeria’s Nations Cup campaign at South Africa 2013 AFCON.”

Although, Keshi appears to have given up on the Newcastle star, he believes Ameobi could still feature in the African football fiesta if he could sort things out with his manager.

“All hope may not be lost. I think Nigeria can still have Ameobi for the tournament. He has promised to thrash out the issue with his Manager, Alan Pardew, and he will tell me the outcome on Wednesday night (Boxing Day). So, I will let Nigerians know the position of things thereafter,” Keshi said in Abuja.

Meanwhile, the Eagles will have their last training session at the Abuja National Stadium training pitch Thursday morning before departing same day for Faro, Portugal, where the team would finalise their preparations for the Nations Cup.

“All the players who will not be making the trip to Portugal will be decamped before the team jet out of Abuja on Thursday, 27 December, 2012, and will travel through Accra, Ghana,” Eagles Media Officer, Ben Alaiya told P.M.NEWS.