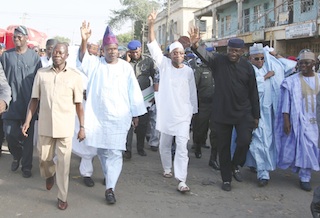 the APC governors in a town-walk in Maiduguri

Although military authorities said one of the blasts in the Customs area of the city targeted a military patrol van and injured three persons, including a soldier, some other military sources said three soldiers were actually killed and four injured.

“There was an explosion targeting a military patrol vehicle today. One soldier and two civilians were injured in the attack which happened around Customs area of the city,” Joint Task Force (JTF) spokesman Lt. Col. Sagir Musa said.

“Three other explosions were reported in the Gamboru and Bolori areas of the city but there were no casualties,” he said without giving further details.

But a military source involved in operations in the city claimed three soldiers were killed while four others were injured in the attack at the Customs area.

“We lost three soldiers. Four other soldiers were injured and several civilians either died or were injured in the explosion,” said the source, who spoke on condition of anonymity because he was not authorised to do so.

The attackers concealed a remote-controlled IED (improvised explosive device) inside a car which they pushed, pretending it had broken down, he said.

When they saw a military van coming, they abandoned the car by the roadside and from a distance, they detonated the explosive device as the van was passing by the abandoned car, he explained.

JTF said troops killed four suspected militants on Monday in Maiduguri, capital of Borno state and the main base of the Boko Harm Islamist sect whose insurgency is believed to have killed at least 3,000 people since 2009.

The Nigerian forces had been combing the city for Boko Haram fighters suspected of involvement in attacks that the army said killed three civilians and left six soldiers wounded last week.

The explosions happened after the APC governors left town, after their meeting at the Government House.

The governors also took a walk to demonstrate the regime of calm in the capital city of Borno state.

The nine governors from four opposition political parties on Thursday endorsed the emergence of the budding All Progressive Congress (APC).

The governors expressed their total support for the APC in a communiqué read by Gov. Rauf Aregbesola of Osun State after their meeting in Maiduguri.

“The meeting reiterated our irrevocable commitment to the emergence of the APC,’’ Aregbesola said.

He said that the governors were satisfied with the various steps taken so far toward the emergence of the party.

“We wish to commend the Central Merger Committee of the APC on the progress so far made in the establishment of the new party, particularly the inauguration of the three major committees on constitution, manifesto and legal/INEC compliance.’’

He said that the meeting was held in Maiduguri in solidarity with the people and the State Government on the recent happenings in the state.

“We decided to hold the meeting in Maiduguri in solidarity with the government and people of Borno and Yobe.

“We are pleased to witness an upsurge of tranquility and calm in Maiduguri contrary to the image of rampant violence that has been painted to the world.

“We discovered that the people are going about their businesses without hindrance.

“We wish to commend the efforts of our brother governors in the two states and the security agents for the restoration of peace and stability.”

Aregbesola announced a donation of N200 million on behalf of the forum for the victims of the crisis in the two states.

“We also sympathise with the families of those who lost their lives and wish to donate the sum of N200 million to the two states for emergency relief support,” he said.

The News Agency of Nigeria (NAN) reports that the governors of Borno, Edo, Ekiti, Lagos, Nasarawa, Ogun, Osun and the Deputy Governor of Yobe, attended the meeting.