Travelogue: My Experience With Nigerian Pirates 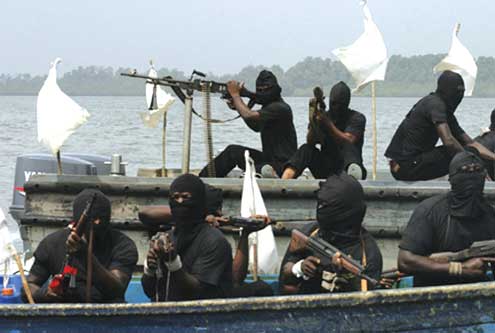 Simon Ateba, a Senior Correspondent with TheNews Magazine and P.M.NEWS, who travelled by sea from Cameroon to Nigeria, narrates his near-death experience in the hands of Nigerian pirates.

We were about 20 minutes from the beautiful and clean land of Calabar, Capital of Cross River State, Southeast Nigeria, when our ship came under attack from about 20 pirates armed with Ak47 and kalashnikov assault rifles and a cornucopia of ammunitions hanging on their black necks.

At the time of the attack, Fakoship as the passenger ship is called, had already crossed ‘the line of death’, an area where most pirate attacks had occurred in the past few weeks and months.

We were in a relaxed mood, having travelled for more than six hours and safely crossing the high sea, and were even enjoying a movie by veteran Nollywood Star, Nkem Owoh, popularly known as Osuofia, the pirates struck.

The pirates came on several speed boats that Monday 25 February 2013, surrounded our ship and pointed guns at the captain before ordering him to stop.

Their words were intimidating and their language unfit for decent human beings.

“Everyone down! Fuck you nigger. Fuck all of you,” they said as they entered Fakoship, their voices reverberating deep down into our brains.

“Bring out all your money and phones. If we search you and find any money, we will kill you and fuck you if we kill you. Fuck everyone,” they said in broken English mixed with little good one.

“Where is the captain and where is Dr. Oyong?” they said.

“Bring all your money and fuck you,” they said further.

A woman two seats away from me had hidden her money in a Bible.

“Fuck you woman. You keep money in the Bible? Fuck you,” they said as they removed the cash and threw the bible metres away some pages flying in the ship.

They moved to a woman who had two-year old baby and pointed the gun at her. Her baby, a boy, began to cry. It was the only passenger voice that could be heard inside the ship.

They searched everyone, collected all they could lay their hands on but killed no one.

It was a great welcome to Nigeria, a country terribly unsafe and appallingly dangerous.

The only good thing was that our passports and travel documents were with the ship owners who always hand them over to immigration on arrival.

In my bag, were all my high school certificates I had gone to collect, my laptop and many documents.

When the pirates left, they forgot my bag. They also left my blackberry phone and didn’t see my office (journalism) ID card. They only collected my purse with virtually nothing in it and a French-made wristwatch I had used for more than three years.

Although I was lucky, many people lost all their money and phones, including a woman who lost about N4 million, the money she had made after selling her goods in Cameroon.

I found travelling by sea extremely risky. On several occasions on the high sea, I thought our ship was going to capsize.

When you travel by sea from Limbe, Southwest Cameroon, to Calabar, Southeast Nigeria, the distance is 85 nautical miles or just above 150 kilometres.

The normal journey with a passenger ship lasts about six hours.

First Class passengers have the highest seats and a better view of the sea while Second Class passengers are closer to the water and endure the shock of the angry waves, especially on the high sea.

On both sides of the high sea, the journey is generally smooth and peaceful. The waves are not felt.

Nigerian movies, known as Nollywood movies, are shown on four screens and snacks and bottles of water are shared and enjoyed.

But once the ship enters the high sea, the waves are merciless and there’s always this feeling that the ship may capsize.

Every minute, it seems the whole thing may just go down and the lifejacket may just be worthless.

I even felt that the engine of the ship was not strong enough and was losing power on the high sea.

Second Class passengers had the feeling that a magnetic force was pulling the ship down.

The crossing of the high sea lasts about 2 hours and those hours seem like eternity.

On the high sea, water is as far as the eye can see. Miles away, it seems water and the sky meet at some point. There are no trees, no houses, only raging waters.

After crossing the high sea, it’s only an hour 30 minutes later that you begin to see birds, and birds mean the land is no more far.

The Cameroonian side of the sea is relatively safer as few pirate attacks have been successful there.

But on the Nigerian side of the sea, safety is minimal as pirates are masters of the areas and the Nigerian Navy seems to be helpless.

In recent weeks, many pirate attacks have occurred, people have lost money, phones and other belongings and others have been kidnapped.

The frequency of the attacks paints a dark picture into insecurity in Africa’s most populous country.

Nigeria must wake up and empower the country’s Navy to stop the madness.