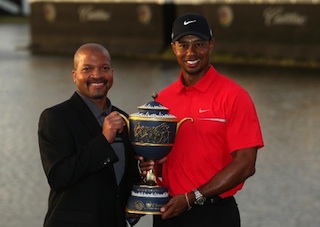 Tiger Woods won the WGC-Cadillac Championship at the Blue Monster course Sunday with a two-shot victory over runner-up Steve Stricker.

Woods fired a final round one-under 71 to earn his second victory of the year and his 76th PGA title, as he steps up his game ahead of The Masters tournament in April.

Woods improved to 40-2 with the outright lead going into the final round on the PGA Tour, fending off a star-studded leaderboard on Sunday to finish at 19-under 269.

The 14-time major championship winner Woods sank his final putt, picked up the ball and put it in his right pocket before waving his black cap to the crowd on No. 18.

“I played well this week,” said Woods, who collected $1.5 million in prize money. “It was one of those weeks where I felt good about the way I was playing and I made some putts. I pretty much got it rolling.”

The 37-year-old Woods posted his 17th career WGC victory, though it was only his first in four years. He has not won a major title in almost five years but hopes to change that with a win in the 77th Masters running April 11-14.

Woods has won a handful of PGA tournaments over the past two years but this was his first in some time against an elite field with most of the top 50 players in the world competing.

Woods made it interesting at the end by making bogey on two of his last three holes.

He needed just 100 putts over the four rounds, the fewest he’s had in his career in a 72-hole tournament.

“It feels good, especially to play that well this entire week on a difficult set up,” Woods said. “The greens got really quick out there today. If you left the ball in the correct spot, you could be pretty aggressive and shoot a good number.

“If you didn’t, boy you had to putt so defensively. The wind was moving the balls on the greens.”

Stricker closed with a four-under 68 to finish at 17-under-par 271. Despite the impressive rally, he couldn’t make up the difference between himself and Woods and finished runner-up for the second time this season.

Woods’s playing partner Graeme McDowell, of Northern Ireland, posted a double-bogey on the final hole to finish at even-par 72. He was joined in third place at minus-14 by Sergio Garcia (69), Phil Mickelson (71) and Adam Scott (64).

McDowell blamed his putting for his downfall.

“I can’t fault my ball striking this weekend,” McDowell said. “Tee to green I did everything I had to do.

“But as these greens got firmer, faster and crustier, my pace and my speed got slower and slower. I wasn’t putting with the same authority I had on Thursday and Friday.”

McIlroy said he feels much better about his play after admitting recently he made a mistake by pulling out of the Honda Classic tournament earlier this month.