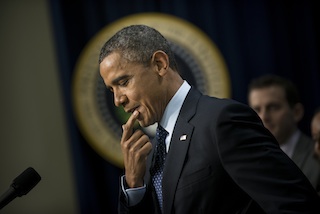 Obama: US deeply worried about the pardon

The United States on Friday condemned Nigerian President Goodluck Jonathan’s pardon of former governor Diepreye Alamieyeseigha, his predecessor in Bayelsa state, who was convicted for money laundering in 2007, after admitting massive embezzlement of state funds.

The US spokesman chorused Nigerian critics of the move, describing it as a “setback” in the fight against corruption.

And State Department spokeswoman Victoria Nuland said Washington had warned the Nigerian government that it could have implications for US aid.

“The United States government was deeply disappointed over the recent pardons of corrupt officials by the Nigerian government,” Nuland said.

Asked about whether US aid to Nigeria could be at threat, she replied: “We have made clear to the Nigerians that this puts a question mark on the kinds of work that we’ve been trying to do with them.

In 2011, the US Agency for International Development spent some $230 million on aid programs in Nigeria, the bulk of which went towards supporting health programs and in particular preventing and treating HIV/AIDS.

Jonathan, who had served under Alamieyeseigha as Bayelsa’s deputy governor, pardoned him and seven others earlier this week, meaning the disgraced official could now run again for office.

Before his detention in Nigeria, Alamieyeseigha was arrested in Britain in 2005 on charges of laundering more than $3 million. But he fled back to Nigeria while on bail. He was re-arrested in Nigeria and detained for months, before he was convicted for money laundering.

Nigeria is seen by the world as one of the most graft-ridden nations, where powerful leaders implicated in massive corruption scandals often evade severe punishment.