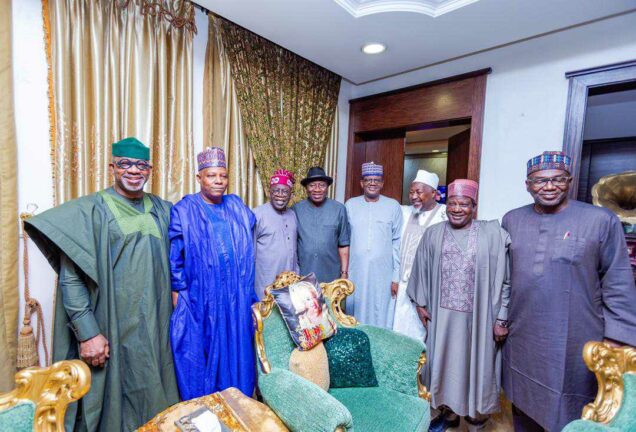 Five APC governors, including the director-general of the APC Presidential Campaign Council, Governor Simon Lalong were also at the meeting, held behind closed doors.

The other governors are Bello Matawalle, Dapo Abiodun, Abubakar Badaru, Abdulrahman Abdulrazaq and

The meeting held after Tinubu had met the governors at a strategic session at the campaign headquarters. The governors also visited President Buhari on Tuesday.

According to WesternPost, the APC candidates discussed next year’s presidential election.

Jonathan had supported the APC in the governorship election in Bayelsa in 2019 election, which was won by David Lyon.

His election was later invalidated by the Supreme Court of Nigeria a day before his swearing-in.

Tinubu said his visit to Jonathan was for consultation in Jonathan’s capacity as a former President and an elder statesman.

According to him, he sees leading Nigeria as going beyond partisan politics and seeks the support of all leading figures in Nigeria to brainstorm and the best way to get the country on a right track.

WesternPost reported that Tinubu had also visited former President Olusegun Obasanjo in his Abeokuta residence two weeks ago, as part of his ongoing consultations.