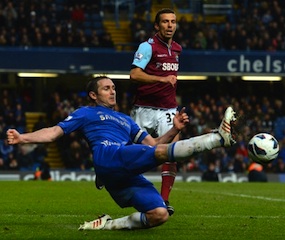 Frank Lampard scored the 200th goal of his illustrious Chelsea career on Sunday as the England midfielder once again tormented his former club West Ham.

Lampard had been stuck on 199 goals for the last month but after four scoreless games he finally reached the landmark when he netted in the 19th minute of the London derby at Stamford Bridge.

The 34-year-old, fittingly named as Chelsea’s captain on Sunday, was picked out by an Eden Hazard cross and took advantage of woeful West Ham marking to power a header past Jussi Jaaskelainen.

Lampard, who joined Chelsea from West Ham for £11 millon in June 2011, is now just two goals behind Bobby Tambling’s all-time record for the west Londoners.

“It is one of my best days. Obviously, winning the Champions League and championships are the best, but personally getting 200 goals for the club, I never thought I would touch that so I’m pleased to get it,” Lampard said.

“Everyone keeps talking about the goalscoring record, I would rather people kept quiet. The important thing is trying to score goals to win games.

“We are in good form and everyone is at it. There is a good feeling around the place and we need to carry it on until the end of the season.”