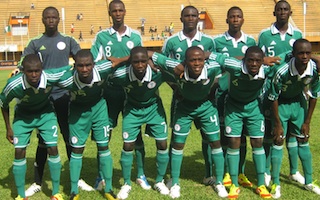 Nigeria's Under 17 team: too much for Congo

Nigeria have qualified for the semi-final of the African Junior Championship currently taking place in Morocco after they beat Congo 7-0 in the final group game played on Saturday.

Kelechi Iheanacho’s hat-trick and Isaac Success’ brace sealed victory for the Golden Eaglets against a less experienced Congolese side.

The win not only took Nigeria into the semi-finals of the CAF U-17 Championship and also ensured qualification for the FIFA World Cup to be played in October and November in United Arab.

Kelechi Iheanacho opened scoring for Nigeria in the early minutes of the game to set the Eaglets on the tone.
Isaac Success made it two for Nigeria in the 27th minute, and added another within six minutes interval through a spot kick after Congo’s left back Imouele was sent off to reduce the team to ten men.

Congo were desperate to prevent further damage, and they were further reduced to nine men after Yobi was sent off in the 40th minute.

And the development favoured Nigeria when they scored their fourth goal through Iheanacho with one minute before the break.

Four minutes into the second half, the Eaglets scored the fifth goal through Musa Yahaya, and the Nigerians Eaglets continued their ride over Congo when Ifeanyi Mathew scored the 6th goal in the 60th minute.

With four minutes remaining, Iheanacho completed his hat-trick on the evening with a powerful goal to ensure Nigeria advance to the semi-final with a 7-0 victory.

Nigeria had several chances to increase the tally, but were unable to finish, with the Congolese now on the defensive.
Nigeria finished top of Group B and will now play Tunisia in Marrakech, while Cote d’ Ivoire, who drew 0-0 with Ghana finish behind Nigeria and will play hosts, Morocco in Casablanca to complete the semi-final line-ups.