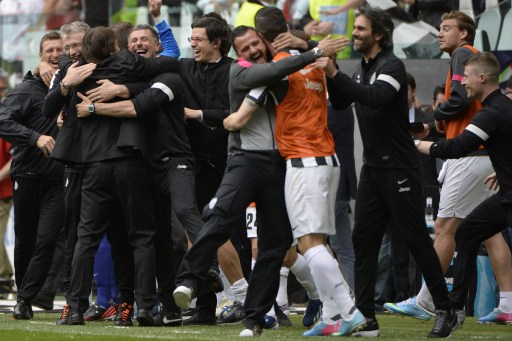 Juventus' coach Antonio Conte (C-L) celebrates after his team defeated Palermo to win the Scudetto, the Italian Serie A title on May 5,

Arturo Vidal’s 10th league goal of the season was enough to secure a 1-0 win over Palermo and help ten-man Juventus to their 29th Serie A title on Sunday.

Juve, however, courted controversy when several players brandished giant shields in the colours of the Italian flag and adorned with ’31’.

The number was a reference to Juve’s belief that they have won 31 titles, despite being officially stripped of two league crowns several years ago due to their implication in a match-fixing affair.

“We’ve taken a weight off our sholuders,” said goalkeeper and captain Gianluigi Buffon.

“After winning the title last season, to finish second would have been a huge disappointment.”

Juventus now have a 14-point lead over second-placed Napoli, who, even in the event of a win over Inter Milan later Sunday, can not overtake the Turin giants in the final three games of the season.

Juve coach Antonio Conte spent the first four months of the season in the stands serving a ban for his alleged implication in a match-fixing affair at his former club, Siena.

He said all the credit went to the players who, while defending the title, also made it to the quarter-finals of the Champions League where they were ousted by Bayern Munich.

“We are very happy. The credit must go to this extraordinary group of players who endured a tough and tiring season,” Conte told Sky Sport Italia.

“I am proud of them because despite us being favourites, the Champions League added an extra layer of pressure.”

Chilean international Vidal had been Juve’s top scorer this season, the attacking midfielder scoring nine in the league and 14 in all competitions prior to Sunday’s encounter at Juventus Stadium.

When the hosts were awarded a penalty just before the hour after midfielder Massimo Donati fouled Bianconeri striker Mirko Vucinic in the area, Vidal stepped up to beat Stefano Sorrentino in the Palermo goal.

Vidal was cautioned for over-exuberant celebrations but the goal sent Juventus Stadium into raptures.

Juve’s title celebrations were tinged by the late sending-off of French midfielder Paul Pogba, who saw red seven minutes from the final whistle after spitting at Salvatore Aronica following a shouting match with the defender.

Juventus, who won the title in 2012 after being unbeaten in the league the entire season, have lost only four times this campaign.

The Turin giants have now secured one of two spots in Serie A which offer direct qualification for next season’s Champions League, with Napoli poised to claim the runners-up spot.

Milan now have a four-point lead over Fiorentina with three games remaning. If Napoli lose to Inter, Allegri’s side could realistically hope to close the four-point gap to second.