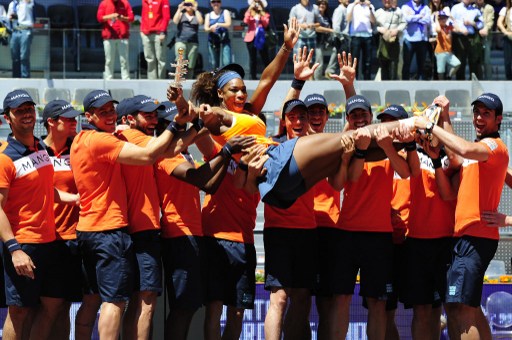 The title is Williams’ 50th of her singles career and extends her amazing run over Sharapova whom she hasn’t lost to in 12 meetings since 2004.

And Williams believes winning a title on red clay for the first time since 2002, after Madrid’s switch back to the more traditional surface after an experiment with blue clay last year, is the perfect preparation for the French Open.

“It feels good, it’s not the ultimate title but a good start in the right direction,” she told a press conference afterwards.

“This court definitely plays more like Roland Garros which is a plus and great preparation.

“It is the ultimate challenge, whether I reach it or not I don’t know, it was last year and I didn’t get it so I’m just getting ready for Rome and then at Roland Garros we will see what happens.”

Victory also retained Williams’ status as the world number one and she warned her rivals that even after 50 titles she has not tired of winning.

“It feels good, I don’t know how many more I can win. I just want to live the moment, live the dream every chance I get.

“Every time play I relish it more. I feel like, honestly Serena, when are you gonna get tired?

“I don’t know if it’s what I went through but I’m really fortunate to be out there, to be healthy and do something that I’m really good at.”

Sharapova though was left to reflect on once again coming up short against the 15-time Grand Slam champion, and rued a slow start after Williams surged out to a 4-0 lead in the first set.

“I started the match really slow today. Against an opponent like her you just can’t give her that because she plays extremely well when she’s confident.

“Starting the match off like that is not going to get me anywhere, so that’s something that I wish I could have changed today.”

However, Sharapova doesn’t believe nerves at the chance of overtaking Williams at the top of the rankings were to blame.

“I think if it was the first time in my career having that opportunity to be number one in the world I think that would have been a factor.

“But I just think a lot of things were slow. I wasn’t reacting well, I wasn’t moving well. Obviously not only the double faults that I made, I also didn’t have a lot of great first serves in.

“She was really stepping up and the placement wasn’t there at all. So there were a lot of things that I could have changed from the beginning.”

Sharapova did eventually get on the board in the fifth game, but there was little she could do to save the set as another crunching backhand return sealed it for the American 6-1.

The Russian managed to react at the start of the second as she broke in the first game and backed it up with two solid service games of her own to lead 3-1.

However, again Williams upped the power and depth on her groundstrokes forcing Sharapova onto the back foot and she broke back comfortably to level at 3-3.

And the Sharapova serve crumbled again when serving to stay in the match as a double fault brought up three match points and Williams converted on the first as Sharapova fired long to seal victory in just over an hour and a quarter.