Mba aims to deliver for Rangers in CAF Confed Cup 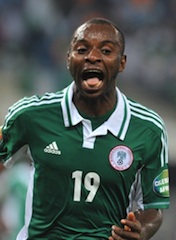 JOHANNESBURG (AFP) – Africa Cup of Nations star Sunday Mba adjusts his sights to the CAF Confederation Cup this weekend as the contest for group places begins.

The 24-year-old midfielder scored the only goal of the Cup of Nations final against Burkina Faso in Soweto last February.

He also struck the winner in the shock quarter-final triumph over hot pre-tournament favourites Ivory Coast in South Africa.

However, a transfer wrangle between Enugu and fellow Nigerian side Warrii Wolves kept him sidelined for several months.

Mba made his African debut for Enugu in a CAF Champions League qualifier this month and scored a wonder goal in Angola.

But his long-range shot could not prevent Rangers losing to Recreativo Libolo and being demoted to the second-tier Confederation Cup.

And Mba will aim for a smoother build-up and more goals when Rangers tackle 2007 and 2008 Confederation Cup winners Sfaxien.

The late completion of his transfer from Warri meant he left Nigeria only 15 hours before the kick-off in Angola.

“It was a crazy situation as I arrived in the town where the match was being staged just an hour before the kick-off.

“I changed into my playing kit inside the taxi taking me from the airport to the ground,” he recalled to Nigerian reporters.

Rangers are one of only two west African clubs to reach the play-offs with 2009 winners Stade Malien of Mali hosting Lydia Academic of Burundi.

There are nine challengers from the northern Maghreb region, although derbies mean only six can reach the group stage.

Tunisia have three contenders with 2006 winners Etoile Sahel away to JSM Bejaia of Algeria while CA Bizertin host Ismaily of Egypt.

Entente Setif of Algeria host US Bitam of Gabon and Saint George of Ethiopia have home advantage over ENPPI of Egypt.

A game between four-time African champions TP Mazembe of the Democratic Republic of Congo and surprise side Liga Muculmana of Mozambique completes the line-up.

There will be four caretaker coaches guiding Mazembe as Senegalese Lamine N’Diaye was redeployed after a Champions League loss this month to Orlando Pirates of South Africa.

Return matches are scheduled for the weekend of May 31-June 2 and the six-matchday group stage kicks off in mid-July.