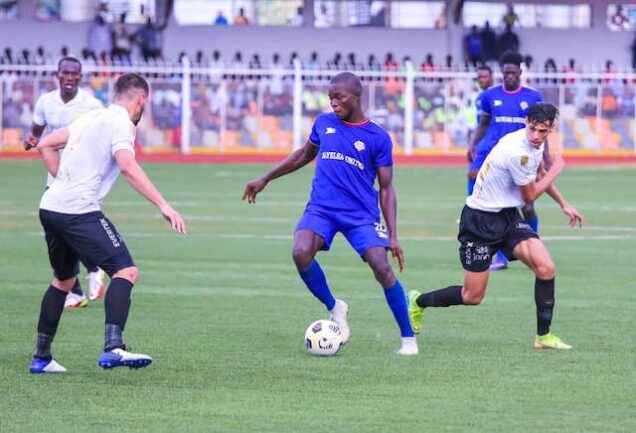 Bayelsa United vs CS Sfaxien in the first leg in Yenagoa

Bayelsa United have crashed out of the CAF Confederation Cup after losing 4-0 to CS Sfaxien of Tunisia in Saturday’s second preliminary round, second leg fixture in Tunisia.

The Nigerian National league side had won the first leg 1-0, courtesy of Victory Beniangba’s 55th-minute effort at the Yenagoa Township Stadium.

At the Stade Taieb Mhiri Stadium in Sfax, Diepreye Teibowei’s men were hit for four as their ambitions faded into thin air.

The Tunisian top-flight side took the lead in the 11th minute as Chris Kouakou capitalised on horrendous defending to fire past goalkeeper John Shaibu.

Six minutes later, Mohamed Ben Ali doubled the advantage as the Nigerian side struggled to get hold of possession.

In the goal-laden first half, Aymen Harzi made it three for Giovanni Solinas’s men in the 27th minute before Fares Chawat completed the rout five minutes before the half-time break.

Although Bayelsa United put up an improved performance in the second half, they were unable to get the goals as they bowed 4-1 on aggregate.