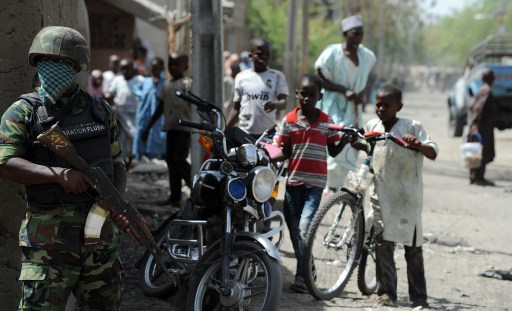 The Nigerian military launched a massive offensive against Boko Haram this week, deploying several thousand troops across three states where President Goodluck Jonathan declared a state of emergency after the Islamists seized territory and chased out the government.

Dozens of insurgents have been killed in the fighting, the military has said, without offering a specific figure.

A security source who requested anonymity told AFP that a helicopter was hit by Boko Haram gunfire, but “managed to rush back to base without sustaining any casualty.”

Nigeria’s offensive is targeting all three states put under emergency decree, including Adamawa and Yobe, but the Boko Haram’s traditional base of Borno is expected to see the most intense fighting.

In Marte district of Borno state, some residents have started fleeing east towards the Cameroon border, less than 25 kilometres (15.5 miles) away.

“It has been scary in the past three days,” said Buba Yawuri, whose home is in the town of Kwalaram in Marte but who has fled to the border town Gomboru Ngala.

“Fighter jets and helicopters kept hovering in the sky and we kept hearing huge explosions from afar,” he told AFP.

He said that as the air assaults began, the security forces told all residents to stay indoors, cutting off his family’s access to food and water.

“I couldn’t hold on any longer. I took the bush path,” and reached Gomboru Ngala early Saturday, he said.

Shafi’u Breima, a resident of Gomboru Ngala, told AFP that the border town is receiving a continuous flow of people arriving from Marte and neighbouring areas.

The phone network in Borno state has all but collapsed since the emergency measures were imposed but residents in Gomboru Ngala use phone services from Cameroon and have been sporadically reachable.

The remote, thinly populated region has porous borders where criminal groups and weapons have flowed freely for years.

The military has sealed previously unguarded crossings to block Boko Haram fighters from fleeing during the offensive.

“Border posts have all been manned by security agents to prevent escape or infiltrations by insurgents,” a military statement said.

Reports of Boko Haram’s presence in Cameroon first emerged in February, following the kidnap there of a French family visiting a game park near the Nigerian border.

The abduction was claimed by Boko Haram and the family was released in April.

The latest military campaign could prove to be the biggest ever against Boko Haram and is believed to be the first time Nigeria has carried out air strikes within its own territory in more than 25 years.

Aeriel support was believed to have been used against rioters in the north in the early 1980s.

Many have warned that there is a risk of high civilian deaths and Nigeria’s military has been accused of massive rights violations in the past, including indiscriminate attacks on civilians.

US Secretary of State John Kerry said Friday that he was “deeply concerned about the fighting in northeastern Nigeria” and urged the security forces to “apply disciplined use of force in all operations.”

Boko Haram has said it is fighting to create an Islamic state in Nigeria’s mainly Muslim north, but the group’s demands have repeatedly shifted.

The conflict is estimated to have cost 3,600 lives since 2009, including killings by the security forces.