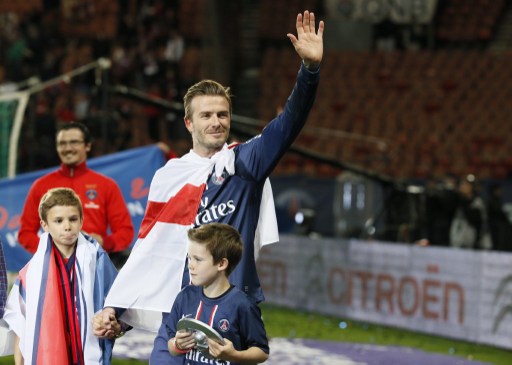 David Beckham, skipper for the night, bade a tearful Parisian farewell on Saturday as the former England star made his final appearance at the Parc des Princes for Ligue 1 champions Paris Saint Germain before heading into retirement.

Last week, Beckham had helped PSG to their first league title since 1994 with a win over Lyon, and then announced he would retire at the end of the season having captured a championship in a fourth different league after England, Spain and the United States.

Beckham had a hand in the other Parisian goal, his corner finding Blaise Matuidi as the former Manchester United star signed off with an assist while Charlison Benschop replied for Brest.

There followed a standing ovation for Beckham as Ancelotti withdrew him with 10 minutes remaining and the former Manchester United, Real Madrid, AC Milan and LA Galaxy star, watched by wife Victoria and his parents, left the arena in tears to warm applause from his teammates, who each afforded him a hug.