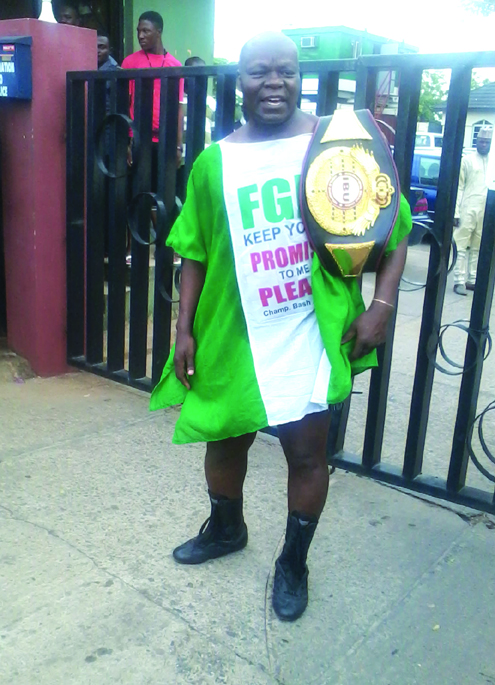 Ageless pugilist, Bash Ali resumed as a gateman at the headquarters of the People’s Democratic Party, PDP, at Wadata Plaza in Abuja early Monday to protest over what he said is the failure of the Federal Government to inaugurate the Local Organising Committe, LOC, for his Guinness Book of World Records boxing championship.

Bash, who wants to become the oldest man to ever enter a boxing ring, said the National Sports Commission, NSC, had on 27 February this year written to the Presidency requesting that the LOC should be inaugurated on 5 March, but nothing was done.

The boxer told journalists that he will remain a gateman at the PDP national secretariat until the LOC is inaugurated.

“I am in serious danger of losing my world title belt without throwing a punch in the ring because there is no venue to defend my title and Nigeria is about to lose the chance to host the historic event,” the boxer said in a letter of appeal to PDP National Chairman, Bamanga Tukur.

Bashi Ali’s effort to have the fight staged in the country has repeatedly met with brickwall as his proposal on the fight to the Federal Government has never seen the light of the day.

Earlier this month, he wrote a lenghty letter to President Goodluck Jonathan to alert him of official bureaucracy, which had prevented the support the government promised for the staging of the fight in the country.

The Edo State-born boxer had a chance to meet Jonathan at the Presidential Retreat on Sport held last October, after which the president promised the FG’s readiness to host the fight in Abuja with the directive to the Chief of Staff, Chief Mike Oghiadomhe and the National Sports Commission, NSC to work out the modalities to ensure a hitch free organisation of the fight.

“We held several meetings at the NSC and on 27 February, an agreement was reached on how to successfully host this historic event to the glory and honour of our great country and forwarded to the Presidency by the Minister/Chairman NSC, Mallam Bolaji Abdullahi. The new LOC was supposed to be inaugurated on Tuesday, 5 March in Abuja. But the inauguration never took place and up till today, despite several calls and text messages to the Presidency, nobody at the Presidency or at the NSC has given me any reason as to why the inauguration did not take place.