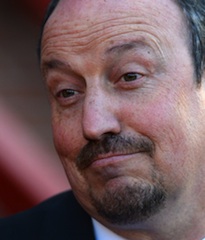 After the final whistle of his 50th and final game with Chelsea, Rafa Benitez walked toward the visitors’ dugout on the third-base side of Yankee Stadium in New York, raised his left hand in a small acknowledgement to someone in the crowd and disappeared into the tunnel.

”A lot of fans, they were supporting in the end,” he said. ”Some of them, maybe we couldn’t change their minds. But we did our job.”

Far away from the jeering supporters at London’s Stamford Bridge, Benitez completed his brief but productive reign with a 5-3 loss to Manchester City in a season-ending exhibition game Saturday night.

Mistrusted by Chelsea fans from his time as Liverpool’s manager from 2004-10, Benitez never was given a chance to settle in after he was hired Nov. 21 to replace Roberto Di Matteo, who was fired six months after leading Chelsea to its first Champions League title. Still Benitez led Chelsea to the title of the Europa League, the continent’s second-tier club competition.

Outgoing Real Madrid coach Jose Mourinho is expected to return to Chelsea for a second stint, the ninth managerial change under owner Roman Abramovich since 2004. Benitez appears headed to Napoli.

”A final, two semifinals, a trophy, top three,” Benitez beamed. ”Everybody was saying, ‘He has to do this. He has to do that.’ We did it.”

Benitez guided the Blues to the semifinals of the FA Cup and League Cup and a third-place finish in the Premier League, ensuring the club’s 11th straight Champions League appearance. Benitez’s title was interim manager, and very quickly it became apparent he wouldn’t be kept on.

”The circumstances were special, still we did our job as professionals,” he said.

Napoli President Aurelio De Laurentiis was quoted Friday as saying Benitez will take over as coach of his club from Walter Mazzarri, who left to replace Andrea Stramaccioni at Inter Milan.

”It’s true that I will go back to London and will try to enjoy with the family for a while,” Benitez said, avoiding a direct reply.

In a wide-open match largely devoid of tough tackles and less physical than many training sessions, Samir Nasri scored twice for City and Ramires had two goals for Chelsea, which was playing its 76th match of the season.

City built a 2-0 lead on goals by Gareth Barry in the third minute and Nasri in the 29th. Ramires scored for Chelsea in the 46th and 69th minutes around James Milner’s goal for City in the 55th.

Nasri made it 4-2 in the 74th, Juan Mata curled in a free kick for Chelsea 8 minutes later, and Edin Dzeko bounced a 30-yard shot past Petr Cech in the 84th.

City also is changing managers, and Malaga coach Manuel Pellegrini is the probable successor. Roberto Mancini was fired May 13, exactly a year after leading City to its first league title since 1968, leaving assistant Brian Kidd was in charge for the U.S. tour. The trip began when City beat Chelsea 4-3 Thursday in St. Louis – City had five wins and a draw against Chelsea this season, including the two friendlies.

”The fans here today and in St. Louis have watched two great games, with lots of goals, lots of attacking football,” Barry said. ”I’m sure there’s a few defensive coaches who are not too happy.”

The match was played four days after Manchester City announced it will partner with the Yankees to own New York City FC, which will become Major League Soccer’s 20th team in 2015.

The crowd of 39,462 on a cool evening – the majority Chelsea fans – was more than the 38,202 for Chelsea’s exhibition against Paris Saint-Germain last July but below the 49,474 for a Real Madrid-AC Milan match the following month.