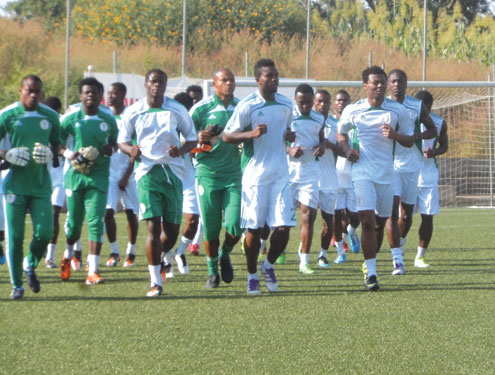 File Photo: Super eagles in one of their training sessions

Despite the long hours flight to Houston, Texas, USA from Germany, the Super Eagles of Nigeria on Tuesday had a training session ahead of Friday’s high profile friendly with the national team of Mexico.

The Eagles despite the hectic season with their respective clubs are raring to go for the game billed for the Reliant Stadium in Texas.

The friendly is the last tune-up game for the Eagles before the crunch World Cup qualifying matches against Kenya and Namibia as well as the Confederation Cup in Brazil in June.

The game is expected to avail Chief Coach, Stephen Keshi the opportunity to access some untested legs in the Eagles even though he has also stated that he will be taking the friendly serious.

Some regulars like the Chelsea duo of Victor Moses and John Obi Mikel as well as Turkey based Kalu Uche were initially pencilled for the Mexico friendly before last minute withdrawals for varying reasons. But the squad have been boosted by the late arrivals of Vincent Enyeama, Elderson Echiejile, Efe Ambrose and Ogenyi Onazi.