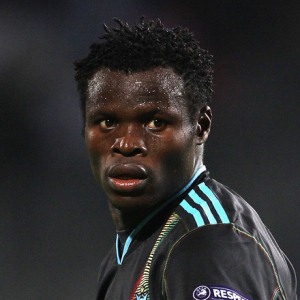 The 28-year-old joins the Nerazzurri from the Ukrainian club, Dynamo Kiev on a two-year contract.

Taiwo, who recently completed a one-year loan deal with Dynamo Kiev in Ukraine, was reported flown into Milan Tuesday night to sign the contract papers with Inter, before making the news public on Wednesday.

“I will be lying if I say I am not surprised but to be honest, I expect him to do well. Some people might say he’s not a young man anymore but they forget that he’s just 28 and started playing at the top level at a very young age,” Chukwu told supersport.com on Wednesday.

The former national team captain, who coached the Nigeria national team between 2003 and 2005, is full of admiration for the left-back’s qualities.

“The only reason Taiwo did not play for the Super Eagles while I was coach was because he was still relatively inexperienced at the time we had established players like Ifeanyi Udeze and Celestine Babayaro. I had plans for him at the time because I was always monitoring his development.

“However, I know he is a very good player and his experience while playing in countries like France, Italy, Ukraine and England will serve him well at this time,” he added.

Taiwo began his European football education at French club, Olympique Marseille in 2004 where he spent eight seasons helping the club to one league and cup title during the period.

He joined AC Milan at the start of the 2011/12 season where he made just four league appearances for the Rossoneri.

The next season, he moved to England to join Mark Hughes’ project at QPR. Hughes did not keep him after his loan spell and he had to seek pastures new ahead of the 2012/13 season and his destination was Ukraine where he teamed up with his compatriots, Brown Ideye and Lukman Haruna at Dynamo Kiev.

He made 20 league appearances for the Kiev club before his latest decision to make a return back to the Italian capital.
Taiwo has made 53 appearances for Nigeria and scored five goals since making his debut in 2004.