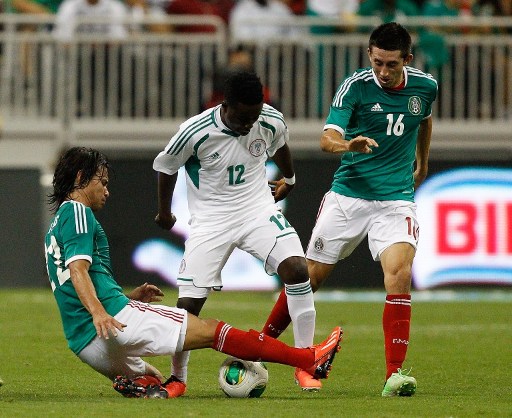 African champions Nigeria and 10-man Mexico settled for a 2-2 draw in a friendly played at Houston, Texas, USA, Saturday morning.

Portugal-based John Ugo impressed in his first start for the Eagles and along with Nnamdi Oduamadi will be a useful option for Nigeria at this level.

Mexico were the better side for the first 23 minutes of the game as the Super Eagles were confined to their own half.

Javier Hernandez “ Chicharito” hit the bar in the 10th minute after he beat Austin Ejide in goal for the Eagles from six yards.

Mexico created a lot of chances within that period only to convert one when “Chicharito” finally put the ball into the net beyond Ejide in the 21st minute.

Brown Ideye had earlier found the back of the net after he was set up by John Ugo in the 17th minute, but the effort was ruled offside.

Eagles fought back and won a penalty when Elderson Echiejile’s goal-bound shot was handled by a Mexican and the resulting penalty was converted by Ideye in the 29th minute to restore parity.

John Ugo made it 2-1 for Nigeria when his 20-yard left-footed shot was deflected into the net in the 40th minute by Torrado.

Nnamdi Oduamadi’s effort in the 63rd minute hit the bar.

Chicharito completed his brace in the 70th minute when he tapped in from close range to ensure there was no victor, no vanquished in this high-profile encounter.

It was the Manchester United birthday boy’s 36th goal in 46 appearances for his country.