Bayern topple Man U as soccer's most valuable brand 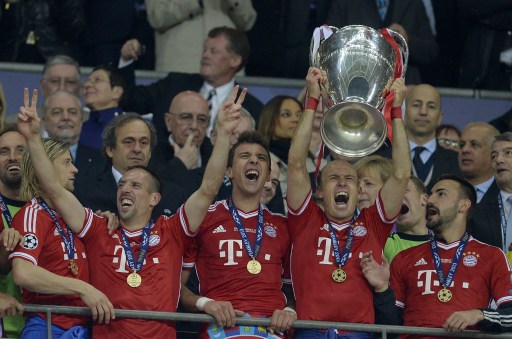 Bayern Munich, with three silverwares in their possession have won another title: being the most valuable brand in the world of soccer.

In a report done yearly by British brand analysts, BrandFinance, the Bavarian giants edged out Manchester United to take over the title.

Manchester United, which won only the Barclays Premiership League and failed to shine in Europe dropped 2 per cent to $837 million, down from last year’s $853 million.

Real Madrid, being deserted by Coach Jose Mourinho and trophyless this season are a distant third at $621 million, although they are one of just two clubs along with United to receive an AAA+ brand rating from the report.

Barcelona, the La Liga winners this season are rated fourth and valued at $570million.

Chelsea, the Europa League champions are valued the fifth most valuable company, with a brand value of $418m, a 5 per cent improvement over their value in 2012, put then at $398million.

Arsenal, at sixth, were almost cheek and jowl with Chelsea with a value of $410million, also notching an improvement of 6 per cent over their value in 2012, estimated at $388 million.

Liverpool are the seventh most valuable club with a brand value of $361 million, down by two per cent from $367 million .

Manchester City are eight on the brand scale with $332 million . AC Milan are valued $263 million and Borussia Dortmund, that played second fiddle to Bayern this season are rated 10th with a value of $260million.