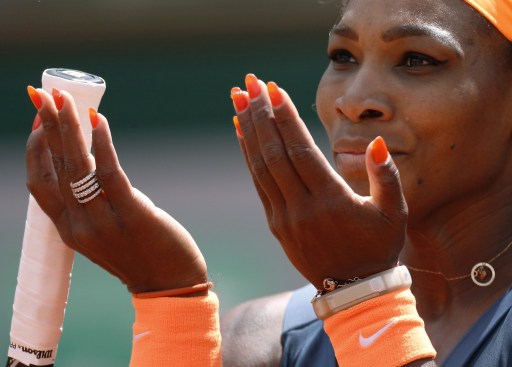 The American top seed, who won her only Roland Garros crown on her last final appearance in 2002, will be playing in her 20th career Grand Slam championship showdown after stretching her current winning streak to 30 matches.

“I told myself: ‘Serena, just concentrate’ and that’s what I did,” said Williams, who had been pushed to three sets and almost two hours by quarter-final opponent Svetlana Kuznetsova.

“Against Maria, I will have to prepare slightly differently. She’s a great player. But it’s magnificent to be back in the final after 11 years.”

The world number one raced through the first set on Thursday in just 21 minutes, firing 18 winners past the Italian fifth seed and allowing her opponent a meagre two points on serve.

It wasn’t all raw power, however, with the top seed winning one point in sixth game of the opening set with a sweet, backhand volley hit from almost behind her.

With Errani, who had lost all of her five previous meetings with the 15-time Grand Slam title winner, was playing with a bandaged right thigh and her hopes continued to sink.

The 26-year-old from Bologna was quickly 3-0 down in the second set, before she finally got on the scoreboard in the fourth game.

It was only a brief pause in the onslaught as Williams sent down another love game for 4-1 and then broke for the fifth time to stretch out to 5-1.

Errani was put out of her misery in the seventh game when Williams clinched victory on her fifth ace of the tie.