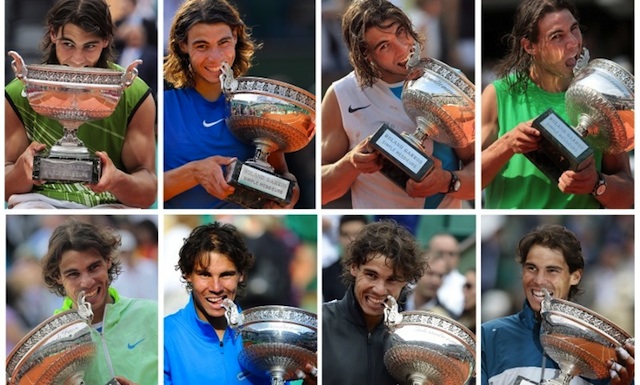 Rafael Nadal admitted that making history as an eight-time French Open champion was an impossible dream when he was desperately battling to reboot his career during a seven-month injury lay-off.

Nadal wept as he watched the Spanish flag being hoisted above Roland Garros after his 6-3, 6-2, 6-3 win over compatriot David Ferrer had made him the first man to win the same Grand Slam title eight times.

But after missing the Olympics, the US and Australian Opens to rest his suspect left knee following his stunning second round exit at Wimbledon just under a year ago, Sunday’s triumph seemed far off on the horizon as he rested up at his Mallorca home.

“It’s very emotional. It’s a very important victory for me,” said the 27-year-old, who now has 12 Grand Slam titles, the same as Roy Emerson, but five off the record held by Roger Federer.

“It’s a great personal satisfaction and I am only here because of so many people. It’s difficult to compare other years but it’s true that this is very special for me.

“Five months ago, we never dreamed about this. I would have thought it would be impossible. But we are here, it’s incredible, fantastic.”

Nadal has now won seven titles from nine finals since he returned to the tour in February, steadily building up his strength with victories in Sao Paulo, Acapulco, Indian Wells, Barcelona, Madrid and Rome before his crowning glory in the cold and drizzle of Paris.

It was his 57th career title and his record for 2013 reads 43 wins and just two defeats, against unheralded Horacio Zeballos in the final at Vina del Mar in his first tournament back and Novak Djokovic in the Monte Carlo Masters final.

He now has 59 wins out of 60 ties in Paris, making him the tournament’s most successful match winner.

Nadal admitted his time off tour caused deep soul-searching and some very low moments where his tennis recovery, if not his devotion to the gym, was limited.

“I am a positive guy, but doubts are part of this life. People without doubts are arrogant because nothing is clear in this world. I had to work as hard as I could to be back here,” he added.

The key to getting back on the court, said Nadal, was staying off it for large parts of his Mallorca retreat.

“I don’t feel fitter than before. I feel like I was fitter in other parts of my career. But that’s normal because I didn’t practice as much as I did in the past.

“In the past eight weeks, my practice has been my matches. I don’t know how we did it to be back here. My movement when I came back was very bad but after a few weeks, I started to move well with the right intensity and the tennis was there.”

Nadal added that he had been buoyed by the out-pouring of affection as he recovered in Spain, a reflection of the high esteem in which he is held not just for his ability on the court but also his modesty off it.

“I received hundreds and hundreds of messages of support and each one has their own significance,” he added.

Amongst those tributes being paid to his astonishing achievement in Paris was a suitably apt tweet from world number six Tomas Berdych.