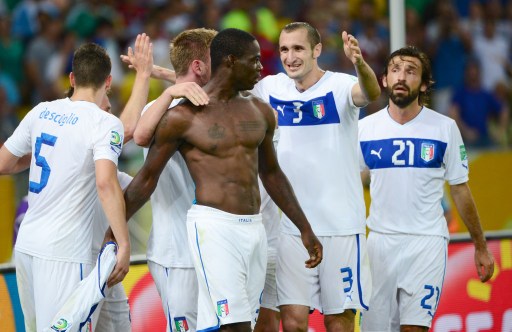 Balotelli, shirtless, celebrates with team mates but got booked

RIO DE JANEIRO (AFP) – A goal 12 minutes from time from an effervescent Mario Balotelli sealed a 2-1 win for Italy over Mexico in Rio’s Maracana stadium on Sunday in their Confederations Cup Group A opener.

Balotelli struck from close range on 78 minutes to give Italy a precious win as they joined Brazil on three points following the hosts’ 3-0 win over Japan in Brasilia on Saturday.

The result delighted Italy coach Cesare Prandelli, though he had harsh words for Balotelli after the striker took his shirt off to celebrate the goal, earning a needless booking just 10 days after being sent off in a World Cup qualifier against the Czech Republic.

“Mario needs to stop taking his shirt off after scoring a goal,” said the coach.

“Picking up silly bookings is not a good idea in a tournament as difficult as this one,” added Prandelli, who after the Czech incident had told his wayward forward that immature behaviour was “his personal problem and he should learn to cope with it”.

But Prandelli heaped praise on fellow scorer Andrea Pirlo, who celebrated a century of appearances for the Azzurri with a magnificent freekick for the opening goal.

“I can hardly find the words to define Pirlo. Let’s just be grateful to him and applaud what he does,” he enthused.

Balotelli, meanwhile, said he would have to rein in his exuberance as another booking would see him suspended and potentially cost him his place if Italy reach the semi-finals.

“I didn’t know about that rule of two yellows. I shall have to take care the next time I score a goal,” he told reporters.

Once again, protests by locals demonstrating at the cost of staging the tournament soured the build-up as had been the case for Brazil’s match, with some 500 people milling outside the Maracana before police dispersed them with tear gas.

Italy took the lead in the 27th minute with a sumptuous freekick from midfield veteran Pirlo, the 34-year-old sending a curling effort from 25 metres past Mexico keeper Jose Corona.

Even prior to that, Italy had looked to be in attacking mode as Balotelli fired in a low shot which Corona saved smartly before the former Manchester City striker almost deceived the keeper with a dipping salvo.

Pirlo then went down in the box after tangling with Emanuele Giaccherini.

Pirlo’s breakthrough finally galvanised the Mexicans, who won the competition on home soil in 1999, into action and within six minutes they were level through Manchester United striker Javier ‘Chicharito’ Hernandez from the penalty spot.

Gio dos Santos dispossessed Andrea Barzagli on the edge of his area before he was shoved by his rival and a penalty was awarded.

Prandelli fielded no fewer than six Juventus men in his starting eleven but it was AC Milan’s erratic Balotelli who went close once again as he drew another save from the equally busy Corona.

Hector Moreno found the best way to stop the former Manchester City striker was by illegal means and duly picked up a yellow card for a foul at the start of the second period before skipper Francisco Rodriguez tried the same technique and earned the same punishment.

Just after the hour Pirlo sent another trademark freekick just wide of the upright before Prandelli sent on some fresh legs in replacing Claudio Marchisio with Alessio Cerci of Torino.

A Gerardo Flores header was the best Mexico could offer as they faded away in the possible belief they had done enough to emerge with an eighth draw in 11 games, the series of stalemates holding up their attempts to qualify for the World Cup.

But Balotelli’s late effort, firing in after a neat flick from Emanuele Giaccherini, stunned them and saw Italy take a giant leap towards reaching the semi-finals with Brazil and Japan to come and buried memories of an embarrassing warm-up draw with Haiti.