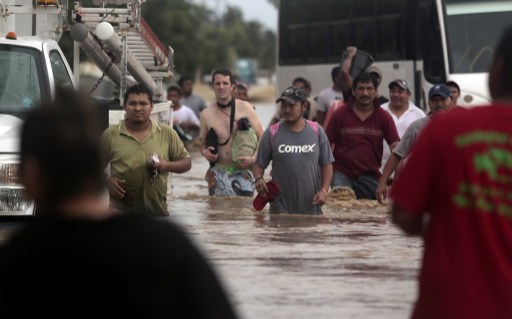 Residents and tourists wade through a flooded street in Acapulco, Guerrero state, Mexico, after heavy rains hit the area on September 16, 2013. AFP

ACAPULCO (AFP) – Mexico reeled Monday from the rare one-two punch of major storms on opposite coasts that triggered floods and landslides, killing at least 40 people while stranding tourists in Acapulco.

The Pacific coast was still being battered by the remnants of tropical storm Manuel, which continued to dump rain after dissipating, while hurricane Ingrid hit the northeast with tropical storm force before being further downgraded.

Thousands of people were evacuated as the two storms set off landslides and floods that damaged bridges, roads and homes across the country.

Water rose to almost 10 feet (three meters) in parts of the Pacific resort of Acapulco, cutting off the main highway to the city and marooning tens of thousands of Mexican and foreign beachgoers.

The last time Mexico was hit by two tropical storms in the span of 24 hours was in 1958, officials said. Never had it been struck by a hurricane and another storm at the same time, forecasters said.

“More than two-thirds of the national territory has been affected,” Interior Minister Miguel Angel Osorio Chong told a news conference.

At least 12 people died when a landslide hit a bus and workers removing earth that had previously fallen on a road in the eastern state of Veracruz, a civil protection official said.

Some 23,000 people were evacuated in Veracruz with 9,000 housed in shelters, Governor Javier Duarte said.

The death toll in the state of Guerrero rose to 21 after the municipality of Tecpan, where four rivers overflowed, reported that six people were killed in a landslide. Another 25 people are missing.

Six more people died in the central states of Hidalgo and Puebla and one in the southern state of Oaxaca, said national civil protection chief Luis Felipe Puente.

Around 50 towns were affected in Guerrero, with some 238,000 people seeing various levels of damage to their homes, Puente said, adding that dozens of shelters had opened for some 20,000 people.

With the highway linking Acapulco to Mexico City closed due to landslides and the resort’s airport shut down due to a power outage, some 40,000 Mexican and foreign tourists were stranded, Mayor Luis Walton said.

The continuous rain slowed the rescue effort as authorities used boats, helicopters and amphibious vehicles to find survivors, who used their smartphones to send SOS messages on social networks.

A federal police helicopter rescued 26 adults and four children who were stuck at the airport, where the access road was flooded. A navy helicopter evacuated 11 people from a residence.

At least 11 deaths were reported in Acapulco, including a family of six whose home was crushed by a landslide.

“There’s no power and we are surrounded by water,” said Carlos Alvarez, who lives near a neighborhood where around 50 two-level homes were flooded.

Residents used inflatable boats to evacuate around 40 people stuck on roofs, he said, complaining that neither helicopters nor troops guarding the area were helping.

In the northeastern state of Tamaulipas, hundreds of people were evacuated as Ingrid made landfall near the town of La Pesca.

The was later downgraded to a tropical depression but it was still producing heavy rain, according to the US National Hurricane Center.

Several communities were cut off by rising waters in Tamaulipas, while authorities rescued two power company workers whose truck was dragged away by a swollen river.