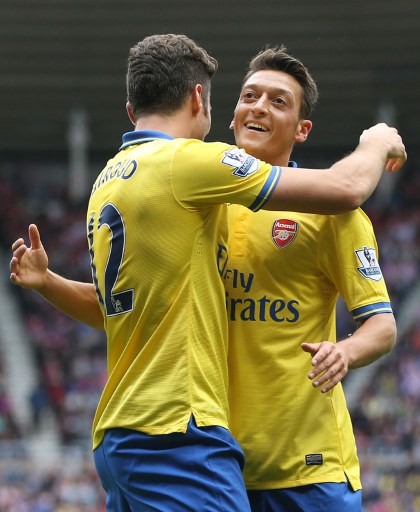 Arsenal went to the top of the English Premier League table after a 3-1 victory at home to Stoke on Sunday.

Victory left the Gunners two points in front of both Chelsea and Liverpool. But north London rivals Tottenham Hotspur will join them on 12 points if they win away to Cardiff later Sunday.

Wales midfielder Aaron Ramsey, who suffered a potentially career-threatening leg injury following a poor tackle by Stoke’s Ryan Shawcross three years ago, made it seven goals in eight games when he gave Arsenal a fifth-minute lead at the Emirates Stadium with a close-range strike after Potters goalkeeper Asmir Begovic had palmed away a Mesut Ozil free-kick.

Stoke, however, were back on level terms when United States international Geoff Cameron scored his first goal for the club in the 26th minute with a controlled shot from the edge of the box after Marko Arnautovic’s volley had come back off the post.

Arsenal though were 2-1 up before half-time through centre-back Per Mertesacker’s looping header.

Bacary Sagna then scored his first goal in 19 months as Arsenal again made Stoke pay for failing to defend a set-piece when he headed home in the 72nd minute from another free-kick by £42.4 million ($66 million, 50 million euros) club record signing Ozil, the Germany international producing a sparkling display on his Gunners’ home debut.

“I didn’t expect to score so many headers from free-kicks against Stoke, but the delivery is very important and the deliveries were good today,” the Frenchman told Sky Sports.

“Like the team he (Ozil) gave a lot on Wednesday night (in the Champions League victory away to French side Marseille), but he showed his class today (Sunday) and he worked hard as well.”

This was Arsenal’s seventh straight win in all competitions and fourth in a row in the Premier League but Wenger was still not completely satisfied.

“The confidence is there and the desire is there, and that’s a very strong base. We can score goals and create chances, today (Sunday) in the second half we lost our usual game but in the end we won,” he said.

Stoke manager Mark Hughes said his side were in the game until Sagna scored Arsenal’s third goal.

“The third goal really knocked the stuffing out of us and really made it difficult to get back on terms then,” Hughes said.

“But up to that point I thought we were always in the game and always looking to play the right way.”

Meanwhile Swansea won 2-0 away to Crystal Palace with Michu putting the Welsh club in front in just the second minute before Nathan Dyer added a second goal shortly after half-time.