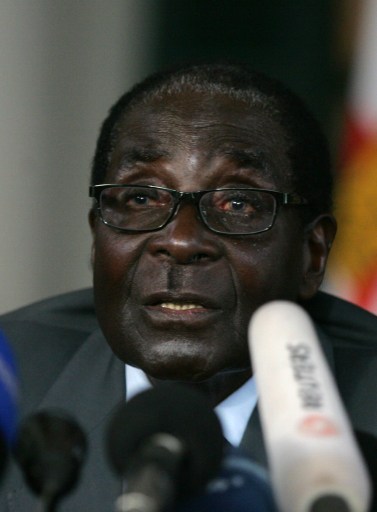 Zimbabwe’s President Robert Mugabe on Thursday berated the U.S. and former colonial power Britain and its allies for trying to control his nation and its resources.

“Zimbabwe is for Zimbabweans, so are its resources. Please remove your illegal and filthy sanctions from my peaceful country.”

Mugabe said that the sanctions imposed by the EU and the U.S. violated the UN Charter on state sovereignty and condemned them as a “foreign-policy tool to effect regime change”.

The US and the EU imposed sanctions on Zimbabwean state firms and travel restrictions on Mugabe and dozens of his associates after a violent 2000 election, and at the start of sometimes violent seizures of white-owned commercial farms for black resettlement.

Mugabe did not refer to the lifting of EU sanctions on Sept. 17 against Zimbabwe Mining Development Corp., which will allow the diamond-mining firm to sell its diamonds in Europe.

He said that sanctions constituted a form of hostility and violence against his government, which was only trying to redistribute land to the majority of landless Zimbabweans.

“Our small and peaceful country is threatened daily by covetous and bigoted big powers whose hunger for domination and control of other nations and their resources know no bounds,” he said.

He said that if the sanctions were intended to unseat him from power “the results of the recent national elections have clearly shown you what they can do.”

Mugabe, who has ruled Zimbabwe since independence from Britain in 1980, overwhelmingly won a July 31 vote extending his 33-year rule. His main rival, Morgan Tsvangirai, denounced the poll as a “huge fraud.”

Washington said the election was flawed and that it does not plan to loosen sanctions against Mugabe’s government.

Mugabe said the US was determined to continue its “relentless persecution” of Zimbabwe, even though the AU and other regional organisations had supported the election result.

“It appears that when the US and its allies speak of democracy and freedom they are doing so only in relative terms,” Mugabe said.

“Zimbabwe, however, refuses to accept that these Western detractors have the right to define democracy and freedom for us.

“We paid the ultimate price for it and we are determined never to relinquish our sovereignty and remain master of our destiny. Zimbabwe will never be a colony again.” (Reuters/NAN)