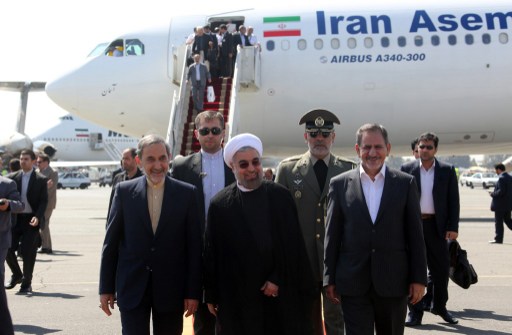 TEHRAN(AFP) – A shoe was thrown at Iranian President Hassan Rouhani’s motorcade Saturday as he arrived home to a mixed reception after his historic telephone conversation with US President Barack Obama.

Iranian newspapers hailed the first contact with a US president in more than three decades as the ending of a long taboo.

The Etemad newspaper carried a front-page photomontage of Rouhani and Obama side by side. “Historic contact on way home,” read its banner headline.

But Rouhani’s 15-minute conversation with the leader of a country long derided as the “Great Satan” was too much for some hardliners.

Nearly 60 gathered outside Tehran’s Mehrabad Airport, chanting “Death to America” and “Death to Israel” as his motorcade passed.

They were outnumbered by 200 to 300 supporters of the president chanting “Thank you Rouhani”, who were separated from the protesters by police.

The shoe was thrown as Rouhani stood up through the sunroof of his car to acknowledge the crowd. It failed to hit its target. 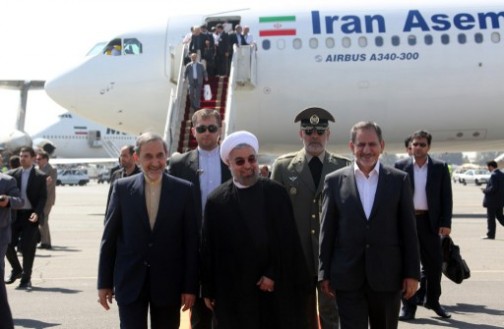 There have been no diplomatic relations between Tehran and Washington since radical students took hostages at the US embassy in the aftermath of the 1979 revolution.

Dubbed the “nest of spies” by the regime, the old embassy site is the scene of annual commemorations which have been the focal point for hardline anti-US sentiment.

Rouhani told reporters at the airport the call had been Obama’s initiative.

“We were going to the airport, when I was informed that the White House had called the cellphone of our ambassador to the UN,” his office quoted him as saying.

“I was informed President Obama wanted to speak to me for a few minutes.”

Iranian media later reported that Rouhani had brought home a 2,700-year-old Persian artefact — a silver chalice in the shape of a winged Griffin — given to him as a “special gift” to the Iranian people.

The artefact depicting the mythical eagle-headed lion, worth an estimated one million dollars, was seized by US customs officials from a smuggler in 2003.

Iranian newspapers crowed that Rouhani had caught the world’s media off guard by taking Obama’s call after coverage of his keenly awaited visit to the United Nations in New York had focused on the lack of a face-to-face meeting.

‘Both sides must be careful’

The pro-reform Etemad paper carried an opinion piece by international relations professor Mohammad Ali Bassiri warning of the challenges of full rapprochement, not least the opposition of Iranian arch-foe Israel.

“These contacts and meetings between Iran and the United States have extremist opponents and both sides must be very careful,” he wrote.

“Many countries, notably the Zionist regime, believe their interests will be jeopardised by a normalisation of relations between Iran and the United States and will seek to stop it.”

Israeli Prime Minister Benjamin Netanyahu, who has described Rouhani as a “wolf in sheep’s clothing”, is to meet Obama on Monday.

Former president Akbar Hashemi Rafsanjani, widely seen as Rouhani’s mentor, said he had pulled off a diplomatic coup by speaking to — but not meeting — Obama.

The commander of the covert operations unit of the elite Revolutionary Guards, the Qods force, said the attention lavished on Rouhani in New York was a vindication of Iran’s tough defence policy.

“The respect shown by the world to President Rouhani is the fruit of the nation’s resistance,” General Ghassem Soleimani was quoted as saying.

The Qods Force lies at the centre of US allegations of Iranian state sponsorship of terrorism, one of a raft of issues, over and above Iran’s controversial nuclear programme, that Rouhani will have to tackle in any rapprochement.

Many newspapers carried front-page photographs of a smiling Foreign Minister Mohammad Javad Zarif and US Secretary of State John Kerry at nuclear talks in New York between Iran and the major powers.

Zarif said he hoped for a deal within a year to allay international concerns about Iran’s nuclear ambitions, but his Western counterparts made clear that an agreement will require major concessions from Iran.

These include suspending all enrichment of uranium beyond the level required to fuel nuclear power plants, and closing Iran’s underground enrichment facility near the central city of Qom.

Back home after all the international fanfare, Rouhani now has to persuade regime sceptics that such concessions are worth making.