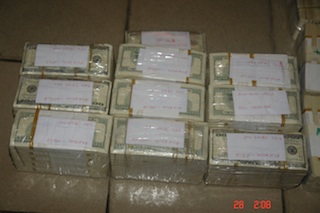 Bales of dollars recovered from 2 Nigerians in South Africa

The Central Bank of Nigeria (CBN) has banned the importation of all foreign currencies except with approval.

According to a statement signed by CBN Director of Corporate Communications, Mr Ugo Okoroafor, on Tuesday in Abuja, the move was sequel to the Bank’s withdrawal of the operating licence of 20 Bureaux de Change (BDCs).

The CBN alleged that the BDCs purchased and sold huge sums of U.S. dollars with no documentation to show details of the transactions.

The statement quoted the Deputy Governor, Economic Policy, Dr Sarah Alade, as saying that the CBN frowned at the existence of strong foreign exchange demand pressure from domestic sources.

She said that the CBN had observed a surge in dollar cash importation by banks and the huge cash sales of the dollars to BDCs by the banks.

She disclosed that the purchase and sale of the cash were not adequately documented by the BDCs.

Alade said that if the trend was not contained, it could pose grave threats to the value of the naira as well as the Nigerian economy which had gradually become dollarised.

She said the CBN Governor, Malam Sanusi Lamido Sanusi, and his team decided to take immediate action to safeguard the naira and ensure its stability in the face of the aforementioned challenges.

Meanwhile, the CBN has also announced that the Retail Dutch Auction System (RDAS) would take effect from 2 October.

This followed the suspension of the Wholesale Dutch Auction System (WDAS) at the official foreign exchange market.

It said that the RDAS would allow only customers of deposit money banks to buy foreign exchange at the CBN through their banks.

This is against the WDAS where the deposit money banks bought foreign exchange at the CBN on their own accounts and in turn sold to their customers.

“The re-introduction of the RDAS is expected to prevent round tripping of foreign exchange purchased at the CBN official window to unauthorised channels.

“Also, a circular has been issued mandating all deposit money banks to redeem all inward money transfers in naira to the recipients at the prevailing inter-bank foreign exchange rate.

“This is in line with best practice,’’ it said.

The statement said that apex bank would continue to support the operations of BDCs in line with existing guidelines, adding that BDCs were still relevant in the foreign exchange market.

“To guard against stifling the activities of the BDCs, the CBN has authorised all deposit money banks to deal at the official foreign exchange market rate.

“It also warned that banks can only sell foreign exchange cash to BDCs subject to a maximum of 250,000 dollars per week per BDC.

“The CBN also advised all BDCs to continue to comply with the conditions of their operating licences, including the proper rendition of returns with respect to the purchases and sales of foreign exchange.’’

The statement said that the apex bank had assured members of the public of its commitment to maintaining price stability and the preservation of the value of the naira in accordance with its mandate.