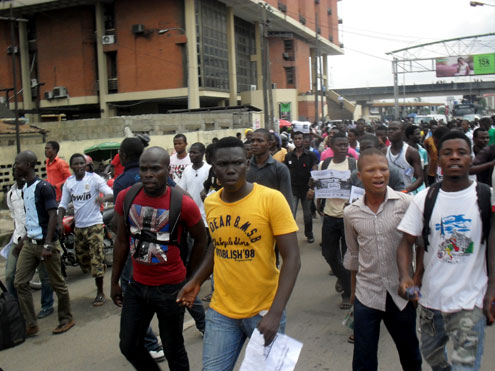 Students on a protest

The National Association of Nigerian Students (NANS) on Friday barricaded the Asaba axis of the Niger Bridge for more than two hours.

NAN reports that the action, which was jointly carried out by some university students and their polytechnic counterparts was in protest against the protracted strike by Academic Staff Union of Nigerian Universities, ASUU.

The aggrieved students blocked the bridge at about 1 p.m., which resulted to a traffic gridlock that stretched from the bridge to Okwe junction about five kilometres to Asaba town.

They also lamented the recent decisions of polytechnic lecturers under the auspices of ASUP to also embark on a similar strike, saying it would further cripple the education sector and send a wrong signal to the international community.

NANS National Public Relations Officer, Victor Ola-Ogun, said that the students were tired of the strike and appealed to ASUU to call it off.

He said that the students had embarked on the peaceful protest and taken it to Kano and “now they are in Zone B, that is Delta and the Anambra area of the country.’’

He said that if the lecturers refuse to call off the strike, the association would further move the protest to Zone C and D, comprising the middle Belt areas and South West of the country.

“We do not want a situation where our ladies will become prostitutes and the men armed robbers.

“We are always there to fight for the lecturers’ welfare and now that the Federal Government has decided to meet some of their demands, they should consider for our sake and go back to work,’’ Ola-Ogun said.

According to NAN, the protesting students, who were drawn from different parts of the country, came in large number.

They will leave Delta to their various destinations on Saturday.