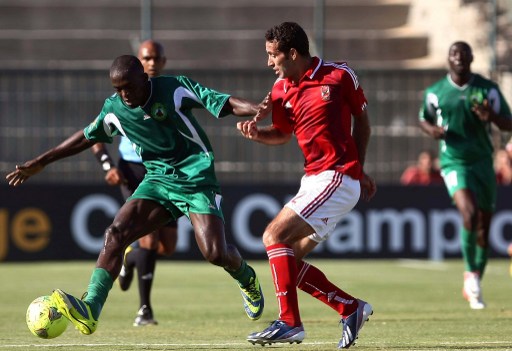 Ahmed Fathy converted what proved the decisive spot-kick as Jacques Haman blazed the next one over the bar in a small, virtually empty stadium at Red Sea resort El-Gouna.

The second leg of the semi-final finished 1-1 with an early Abdullah Al-Saied goal cancelled midway through the second half by leading Champions League scorer Kada Yougouda.

With the first leg also ending 1-1, a shootout ensued to break the aggregate deadlock, and Ahly secured a final showdown against Orlando Pirates.


Ahly face the Soweto club over two legs in November with a $1,5 million (1.1 million euros) first prize and a FIFA Club World Cup place at stake.

The semi-final outcome was a massive relief for Egypt after a national team stacked with Ahly stars was humiliated 6-1 by Ghana in a World Cup play-off five days ago.

Ahly went ahead inside three minutes as Sayed Moawad crossed and Al-Saied towered above two defenders to nod the ball wide of Maxime Feudjou.

The dominant Egyptians did not threaten to score again until midway through the half with chances falling to Walid Soliman and Rami Rabiea in quick succession.

Soliman hurried a shot that finished well off target and a looping Rabiea header off a Fathy free-kick landed on top of the net.

Coton finally started to look dangerous during the 10 minutes before half-time and gave the record seven-time champions several scares.

Ewangue Mbongo got past a defender but goalkeeper and captain Sherif Ekramy used his legs to block a close-range shot.

Mpondo Kingue came even closer three minutes later, hitting the post after stretching to connect with a partially cleared cross.

After 35 largely idle minutes, Ekramy was suddenly the busiest footballer in El-Gouna and needed two attempts to hold a snap shot from teenager Yougouda.

Coton continued to press as the second half progressed without creating any clearcut chances on a clear, hot afternoon in north-east Egypt.

But with 65 minutes gone the visitors deservedly levelled when several Ahly defenders failed to cut out a low cross and Yougouda netted from close range.

Pirates qualified Saturday by drawing 1-1 with Esperance in Tunisia to advance on the away-goal rule after a goalless first leg.

Rooi Mahamutsa put the Buccaneers ahead with a flying header off a corner on 52 minutes only for Iheb Msakni swept home a low cross soon after.

The South Africans played Ahly twice during the group stage, winning 3-0 in El-Gouna and drawing 0-0 in Soweto.