Jonathan promises to build an airport in Ekiti state 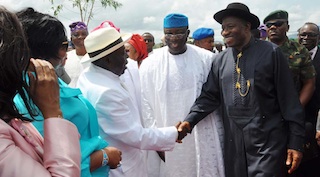 Nigeria’s President Goodluck Jonathan, on Saturday, said that the Federal Government would construct an airport and a secretariat in Ado-Ekiti.

The President made the remark in Ado-Ekiti while reacting to the request by Gov. Kayode Fayemi during his one-day visit to the state.

Fayemi, had in an address of welcome, decried the non-existence of the facilities in the state.

According to him, Ekiti is the only state among the six created in 1996 that is yet to have a Federal Secretariat.

Fayemi also complained that the non take-off of the airport project promised by the federal government was slowing down the pace of economic activities in the state.

He urged the President to facilitate the refund of the money spent by the state government on the construction and rehabilitation of some federal roads in the state.

According to him, out of the N12 billion spent by the state government to reconstruct 98.4 kilometres of federal roads only N2 billion has been refunded.

The governor commended Chief Afe Babalola, founder of Afe Babalola University, Ado-Ekiti, for contributing to the ongoing reform of the education sector.

President Jonathan, who said he was in the state to commission projects at the university, described Babalola’s vision for the education sector as “noble.”

He also described him as “a man of unassailable character and epitome of knowledge”.

Earlier in his address, Babalola said he ventured into the project to ensure the provision of qualitative education to Nigerians.

He said funding the education sector should not be the responsibility of government alone and called on wealthy Nigerians to also invest.

Babalola disclosed that he had, so far, committed about N60 billion into the university project since its establishment about four years ago.

Dignitaries at the occasion included the Governors of Ondo, Gombe and Kaduna States, as well as ministers and traditional rulers, among others.