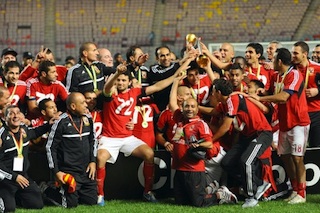 Egypt’s Al Ahly won an eighth African Champions League trophy when they beat Orlando Pirates of South Africa 2-0 in the second leg of the final in Cairo on Sunday.

‘The Red Devils’ of Cairo will besides pocketing the cash prize of $1.5 million represent Africa at the FIFA Club World Cup in Morocco next month.

The legendary Mohamed Aboutrika opened the scoring in the 54th minute when he stabbed home from just outside the six-yard box.

Ahmed Abdul Zaher doubled the Ahly lead in the 78th minute when unmarked inside the box he shot past the Pirates goalkeeper Senzo Meyiwa.

The Egyptian champions were reduced to 10 men six minutes from time when defender Sherif Abdel Fadil was sent off for a foul on Daine Klate.

Pirates, champions in 1995, put up a spirited fight but Ahly’s second goal seemed to kill them off inside a packed Arab Contractors Stadium in Cairo.

The South African champions created several chances, but could not take them.

The best chance of the first half fell to The Buccaneers in the 35th minute when somehow Tlou Segolela failed to convert from inside the six-yard box, after a superb pull back by Klate from the right, with the Ahly goalkeeper well beaten.

Pirates failed again in front of goal in the 63rd minute when Lennox Bacela dribbled past goalkeeper Sherif Ekramy, but his final ball screamed across the face of goal after the Ahly shot stopper forced him wide.

There were no clear-cut chances in front of goal in the first 15 minutes until Mohamed Nagieb’s header flashed across the Pirates goal.

On 20 minutes, Ahly goalkeeper Ekramy had to come out to block Segolela inside the penalty area.

The Pirates goalkeeper then made a brave save inside his goal area nicking the ball off the feet of goal-bound Zaher a minute before the interval.