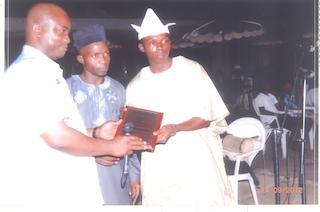 Tunde sanni, middle, at the presentation of an award by NUJ state chairman, Gbenga Opadotun to Olawale Ajao of Alaroye newspaper

He has been buried in the town according to Islamic rites.

Sanni took ill four months ago and was admitted at the University College Hospital (UCH), Ibadan where he spent about one month.

After discharge, he returned to his home town of Ijebu Imodi where he spent his last days.

He started his journalism career in the

mid-80s. He worked at the defunct Sketch newspaper and later Punch newspaper before joining ThisDay.

Sanni was the Chairman, Correspondents’ Chapel of the Oyo State Council of the Nigerian Union of Journalists (NUJ) from 2010-2013.

He is survived by his wife and eight children.

In a swift reaction, Governor Abiola Ajimobi of Oyo State has described Sanni’s death as disheartening.

The governor, in a statement issued in Ibadan today by his newly sworn-in Special Adviser, Dr. Festus Adedayo, said that he received the news of Mr. Sanni’s death with shock and disbelief.

Although, he recalled that the late correspondent had for some time been in and out of hospital for an undisclosed ailment, the governor expressed the regret that Sanni finally lost the battle to save his life.

The NUJ in a statement by the chairman, Mr Gbenga Opadotun, also bemoaned the passage of the veteran reporter, saying his multiple roles in the union would be missed.

Also, the Correspondents’ Chapel, in a statement by its Chairman, Bisi Oladele, described Sanni’s death as a great loss to the pen profession.
“As colleagues, we will miss Tunde Sanni’s deep political and news analyses, friendship and his sense of humour.”