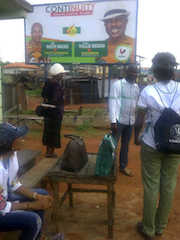 The All Progressives Congress (APC) has raised the alarm over the late or non delivery of voting materials to the party’s strongholds during the ongoing Governorship election in Anambra State, describing the action as a deliberate attempt to disenfranchise the party’s supporters and make the election anything but free and fair.

In a statement issued from the party’s election situation room in Lagos on Saturday by its Interim National Publicity Secretary, Alhaji Lai Mohammed, the party also said early reports from the state indicate a pattern of harassment of
its members and the violation of INEC guidelines, among others, asking Nigerians to take note.

It specifically decried the continued harassment of its Deputy National Secretary, Mallam Nasir el-Rufai by armed State Security Service (SSS) personnel, since he arrived at Awka on Friday night for the election.

APC said apart from restricting Mallam el-Rufai to the Finotel Hotel where he is staying, the SSS personnel also barged into the hotel’s restaurant while he was eating and collected the phones of everyone there, apparently to prevent their pictures from being taken as they laid a siege on the hotel.

”These SSS personnel claimed to be acting on orders from above. Whoever gave them the order, we in the APC believe it is illegal to prevent a duly accredited top official of a party involved in an election from moving around to monitor the election. He has a right to be at the election as our Deputy National Secretary,” the party said.

It also decried a situation in which a polling unit is situated right under the billboard bearing the pictures of APGA candidate Willie Obiano and his running mate in Aguleri, in clear violation of INEC guidelines.

”As at the time of issuing this situation report, election materials have not yet arrived at Idemili North and South, Ogidi ward 1, Nkpor ward 1, Abatate, booth 012 of ward 2 Nibo and one booth at umunnakwe hall; There is no INEC or police presence at Obi Ilo Okoye polling unit in Awada, Onitsha; INEC register for 2011 were not brought to Palm Site Market 1&2; INEC is refusing to accredit voters in Awka South LG Ward 8; In Nnwei north Otolo ward 03, polling unit 14, only 6 people out of 77 were accredited and others couldn’t find their name; In Ward 8, Awka Government House, PDP agents are openly soliciting for votes in exchange for money, just as it is happening in Onitsha North Ward 100 and in CKC Adazi Nnukwu, and at Nteje Unit 004 in Oyi LG, APGA and PDP are negotiating how to share votes.

”These are just a few of the examples of the shenanigans going on right under the nose of INEC, and we demand an immediate rectification so that no citizen will be disenfranchised, and so that all the parties will have a level playing ground. If this is not done urgently, the promise of a free, fair and transparent election in
Anambra by the President and INEC would have been nothing but a ruse,” APC said.