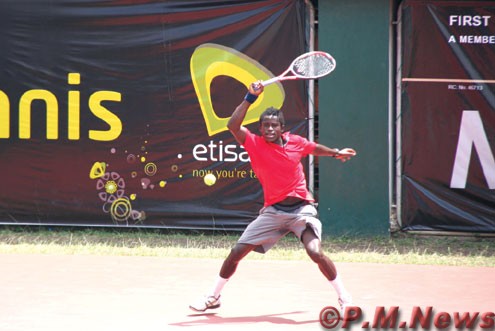 The All Africa Games gold medallist in Maputo, Mozambique in 2011 defeated Davis Cup player, Shehu Lawal in straight set of. 6-2,6-2 to win the tournament for the first time and take home the sum of N800,000 prize money.

In what could be described as a repeat of the semi final match of this year’s Central Bank of Nigeria, CBN Open, Enosoregbe showed enough composure to see off his more fancied opponent in less than two hours.

A delighted Enosoregbe told P.M.NEWS Sports after receiving the prize money and the trophy that his commitment and hard work paid off for him.

He also stated that the elusive Dala Championship means a lot to his tennis career as this victory will help him move up in the national ranking.

“I’m so delighted with this win because it’s a hard fought victory. This was as a result of my hard work in the past years.

“I am happy that I was not injured and the fact that this will be my first laurel since I have been taken part in the Dala Championship makes me feel happy and rejoice,” said Enosoregbe.

The Edo state-born player said that his next destination is Benin Republic where he is likely to play a tournament next month.

“I plan to travel to Benin Republic in December to play a championship,” he said.

Meanwhile, a disappointed Lawal, who refused to speak after the match, pocketed the sum of N400,000 as runner up prize