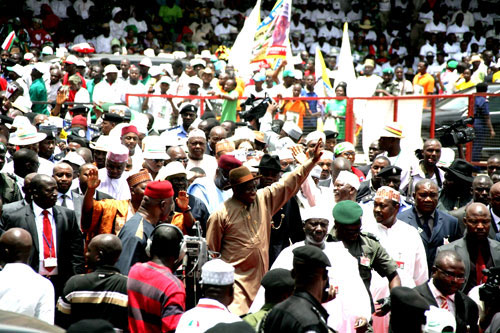 The Nigerian Presidency on Tuesday said that it was not threatened by the defection of the splinter group in the ruling Peoples Democratic Party (PDP) to the opposition party, APC.

The Special Adviser to the President on Political Affair, Ahmed Gulak, made this known when he spoke with the State House Correspondents at the Presidential Villa.

Gulak, who reacted to the development, said neither the presidency nor the ruling party felt threatened.

He added that the party and the presidency welcomed the development because it would end the distractions that had been going on.

“For a long time, I have said it that their hearts have not been in PDP. It is good that they have told the world that they have taken a stand so that PDP will not be distracted. PDP as a party will be focused to build our party because a lot of people are waiting for this moment. A lot of people in the APC have contacted me severally that they want to come back to PDP. They said they were just waiting for what happened today to happen, and to us, it is a good development,’’ he said.

Gulak, however, said if the group decided to return to the PDP fold, they would be welcomed back.

“We are talking about peace and reconciliation is an ongoing process. If they go outside there like those that went there before them and taste that the outside there is empty they are always welcomed back home like we did before,’’ he said.