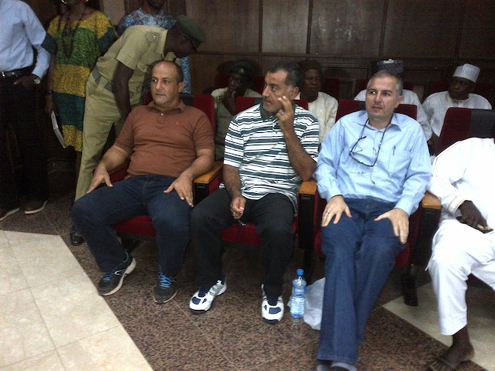 A Nigerian Federal High Court siting in Abuja on Friday discharged and acquitted two Lebanese, Mr. Mustapha Fawaz and Mr. Abdullahi Thahini alongside their companies; Amigo Supermarket and Wonderland Amusement Park, both in Abuja of any complicity in an amended 16 count charge of terrorism related offences brought against them by the Department of State Security Service.

However, their 59 year old fellow citizen and co accused, Mr. Tahal Roda, was found guilty in five out of the 16 counts which relate to conspiracy, offences that carry life sentence each.

The Lebanese were charged for being members of Hezbollah military wing who allegedly, agreed to receive training in preparation to engage in the commission of a terrorist act.

They were also accused to have knowingly permitted a meeting connected with an act of terrorism to be held in the premises of Amigo Supermarket and Wonderland Amusement Park and Resort.

Mr. Thahini was accused of being the coordinator of Hezbollah in Nigeria and was charged with involving himself in an arrangement to facilitate the acquisition of terrorist funds by removal out of jurisdiction of the sum of $61,000.

The court presided by Justice Adeniyi Ademola held that the prosecution led by Mr Simon Egede failed to prove the ingredients of the counts of the charge as they relate to Mr. Fawaz and Mr. Thahini beyond reasonable doubt.

The court held that the first six counts of the charge boarder on terrorism and related offences where the Lebanese were alleged to be members of Hezbollah military wing and noted that there is no federal government gazette proscribing the organization as an international terrorist organization in Nigeria and held that the recently passed Terrorism Prevention Amendment Act 2013, cannot be applied retrogressively to cover the training received by the accused persons from the organization in 2005.

Justice Adeniyi also berated the prosecution for not tendering the weapons allegedly recovered from the premises occupied by Mr. Tahal Roda, in Kano state noting that the non tendering of the cache of arms by the prosecution dealt a fatal blow to their case. Furthermore, the judge also gave knocks to the prosecution team for only tendering still photographs and digital recordings of the recovered weapons without bringing the makers of those exhibits to come and lay foundation for the exhibit as well as offer the defense opportunity to cross examine them on the types of weapons that were allegedly recovered.

However, the counts of the charge alleging that Mr. Tahal Roda conspired with one Mr. Fauzi who is said to be at large to illegally import those weapons were upheld by the court which found Roda guilty on counts seven and nine of the charge bordering on conspiracy and sentenced him to life imprisonment.

The 59 year old Roda was born in Kano state and has lived most of his years in Kano state, except for very occasional trips to Lebanon and is also a grand father. Both his children and grand children were all delivered in Kano, northern Nigeria.

The Lebanese were arrested following the arrest of Mr. Thahini at the Aminu Kano International Airport for failing to declare the sum of $61, 000 USD in his possession. Interrogation led to a search at the premises occupied by Roda where the cache of illegal arms and ammunition was found. They were subsequently arrested and transported to Abuja for trial.