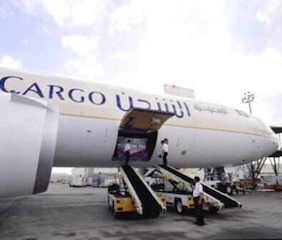 Flights have been suspended at Nnamdi Azikiwe International Airport in Abuja, the Nigerian capital, the Ministry of Aviation said on Thursday, following a serious incident involving a Saudi Arabian cargo plane on Wednesday night.

The Saudi plane, a Boeing 747 cargo aircraft overran the runway and ran into a maintenance area of the airport before bursting into flames, witnesses said. The fire was promptly put out and there was no casualty.

Flights were suspended because the affected aircraft is yet to be removed from the only runway at Abuja airport, said Joe Obi, spokesperson to Stella Oduah, Minister of Aviation.

“No casualty recorded while efforts are underway to move the air craft away following a preliminary assessment visit by AIPB, NCAA, FAAN and other relevant agencies.

“In the meantime, flights into Abuja have been temporarily suspended to facilitate evacuation efforts to clear the runway. Normal operations will resume immediately the aircraft is removed,” Obi said.

He said the serious incident was not a plane crash and expressed regrets for the suspension of flights at Abuja airport.

“While it must be noted that the incident is not a plane crash, the Federal Ministry of Aviation regrets all inconveniences this must have caused our esteemed air travellers and Airport users. Concerted effort is being intensified to remove the obstacle and restore normalcy.

“The public will continue to be updated as progress is made towards restoring normal operations at the airport,” Obi said.
The Accident Investigation Bureau, AIB, said investigation into the serious incident had commenced.

“We have commenced investigation into the Abuja Airport incident,” said Tunji Oketunbi, spokesperson for AIB, the agency in charge of investigating plane crashes and serious air incidents in Nigeria.

An aviation stakeholder, Mohammed Tukur, said his calls and those of others that a second runway should be constructed in Abuja have become necessary.

“We have been saying it normal to have only one runway in Abuja, we need another runway there. We need to focus on what is important in the aviation industry instead of wasting money and energy on other things,” he said.